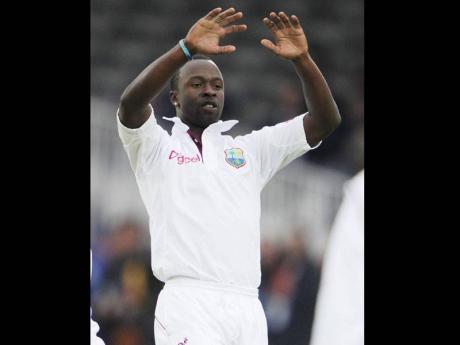 West Indies' Kemar Roach celebrates after claiming the wicket of England's James Anderson during the 4th day of the first test match at Lord's yesterday. - AP

A devastating spell from pacer Kemar Roach rocked England late on the penultimate day yesterday, leaving the hosts stunned and handing West Indies a glimmer of hope of winning the first Test at Lord's.

Set 191 for victory, England stuttered to the close on 10 for two after Roach produced quick, lifting deliveries to knock over captain Andrew Strauss for one and night-watchman Jimmy Anderson for six, in a torrid 20-minute period at the end.

England will enter today's final day requiring 181 more runs with eight wickets intact, setting up a thrilling finish to an encounter that has swung this way and that.

Earlier, the unflappable Shivnarine Chanderpaul fell just short of his 26th Test century as West Indies staged a gallant effort before they were dismissed in their second innings for 345.

Resuming the day on 120 for four, still requiring 35 runs to avoid an innings defeat, West Indies were lifted by half-centuries from Chanderpaul, who struck 91, and Marlon Samuels, who got 86.

They put on 157 for the fifth wicket, a record for the West Indies at Lord's, as the visitors safely navigated the first session without losing a wicket.

When both perished in the post-lunch session, wicketkeeper Denesh Ramdin hit a responsible 43 and captain Darren Sammy stroked a cavalier 37, to provide impetus to the innings.

Seamer Stuart Broad once again led England's attack with four for 93 to finish with 11 for 165 and become the first Englishman to grab a 10-wicket haul at Lord's in 34 years.

In four of the scheduled seven overs available before the close, Roach and new-ball partner Kemar Edwards then rattled England, changing the complexion of the match.

Roach got his second delivery of the second over to rear from a length and the left-handed Strauss could only stab it to gully where Kieran Powell took an easy catch with England having just a single run on the board.

Anderson lasted five balls before gloving the first delivery of Roach's second over to Ramdin behind at 10 for two, as he tried to avoid a short one angled into his ribs.

West Indies had a huge slice of misfortune off the very next delivery when they had a huge lbw appeal turned down against Jonathan Trott.

They immediately reviewed the decision but while replays showed the ball cannoning into the stumps, it pitched just outside the line and the call remained with the on-field umpire.

The drama was in contrast to the sedate start to the day for the Windies as Chanderpaul and Samuels clawed the tourists back into the contest with obdurate innings.

Chanderpaul faced 250 balls in just under six-and-a-half hours at the crease and struck 10 fours while Samuels stroked 12 fours in an innings spanning 172 balls and 230 minutes.

As expected, Samuels was the more aggressive of the two, taking two consecutive pulled boundaries off Broad and twice cutting Swann for fours when the bowler was introduced for his first spell of the morning.

A boundary through mid-off saw him raise his 14th Test half-century.

Chanderpaul, meanwhile, brought up his landmark in less convincing fashion when he inside-edged seamer Tim Bresnan for four.

Samuels then celebrated his half-century with two thumping drives for four off Swann as West Indies cantered to lunch in perhaps one of their best sessions of the game.

West Indies lost Samuels in the seventh over after the break at 222 for five, caught by Swann at second slip off Broad, in the sixth over with the new ball as the right-hander sparred at one that left him.

Chanderpaul and Ramdin added a further 39 for the sixth wicket in a drama-less stand and they seemed set to take West Indies to tea without further loss when Chanderpaul missed a sweep at Swann, nine minutes before the break and was adjudged lbw.