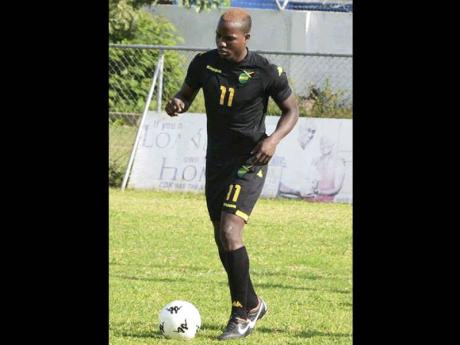 The Reggae Boyz number 11 shirt appears to be in good hands, as its new owner, Errol Stevens, continues to impress at each opportunity.

Stevens proved a game changer in the team's 1-0 win over Guyana at the Montego Bay Sports Complex on Friday evening, as the second-half substitute was responsible for creating the game's lone goal, which was scored by debutant Jeremie Lynch in the 62nd minute.

Aside from his part in the goal, Stevens tormented the Golden Jaguars on the right side of the park, as they found it difficult to contain him to the point where his shirt was torn and had to be replaced.

The Reggae Boyz number 11 shirt was made famous by the team's current head coach Theodore 'Tappa' Whitmore, who ghosted past opposing players with consummate ease during his playing career. He, however, reached legendary status during the 1998 FIFA World Cup when he scored two goals to earn Jamaica its first victory at the tournament; a 2-1 victory over Japan.

"It is a great motivation; I hope he knows the respect that I have for him, but at the same time it has to be kept professional, so I try to just stick to the work and do the job."

Stevens, who made his debut for Jamaica in the 2-0 loss to Colombia on September 6, 2011, was pleased with his performance in Friday's game, as he aims to thrill local fans.

"I just have to thank God for the performance. I think more than anything it is the hunger inside of me that just wants to come outside and with the environment and the spectators and the people who came out to support Jamaica, I could only do my best," the 26-year-old shared.

The former Greater Portmore High School student is hoping that based on his showing he will make the final squad, which Whitmore plans on naming today, for the next stage of World Cup qualifying, which commences on June 8 when Guatemala visits the National Stadium.

"I am a free agent at the moment, as right now it is mainly about the national programme and to give the best to my country."