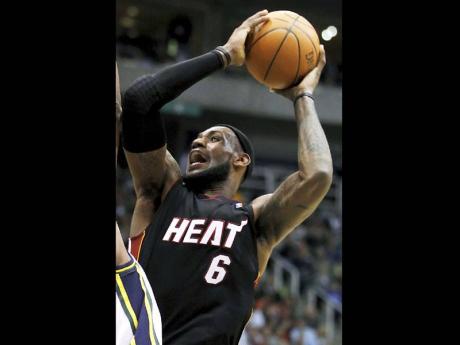 LeBron James scored 40 points, superstar sidekick Dwyane Wade added 30 - 22 in the second half - and Miami's dynamic duo took over after half-time to get the Heat even in the series with a 101-93 win over the Indiana Pacers in Game 4 of the Eastern Conference semi-finals yesterday.

With Chris Bosh injured and back in Florida, the James-Wade tandem saved the Heat, who will host Game 5 tomorrow night at AmericanAirlines Arena.

James was at his MVP best, adding 18 rebounds and nine assists and refusing to let Miami's season slip away. Wade rebounded from the worst play-off game of his career, shaking off a 1 of 8 shooting start and adding nine rebounds and six assists.

Down by 10 points in the third quarter, the Heat were in danger of having their championship dreams obliterated by an Indiana team outworking them at both ends and backed by towel-waving fans.

James would have none of it.

And this time, Wade joined him.

Wade, who scored five points in Game 3 and yelled at coach Erik Spoelstra on the sideline during a third-quarter timeout in Miami's 19-point loss, came alive in the third when he made all six shots and scored 14 points. James added 14 as well in the period as the pair landed a 1-2 punch on the Pacers' chin.

Granger's 3-pointer had given Indiana a 61-51 and the Pacers, outhustling the Heat to loose balls, appeared poised to take a commanding lead in the series.

But that's when James and Wade put on a jaw-dropping spectacle, combining for all but two points in a 25-5 run that put Miami up 76-66.

Miami also got a huge lift down the stretch from Udonis Haslem, who hasn't been a factor in the series but made four big jumpers in the final six minutes despite playing with a large bandage over his right eye after being elbowed by Indiana's Tyler Hansbrough.