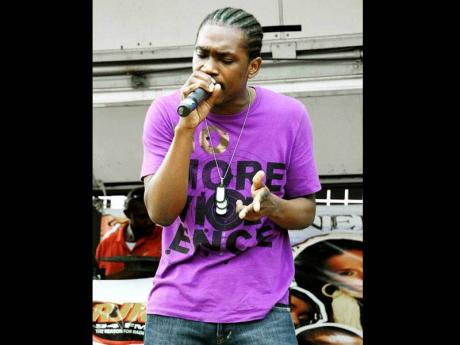 Like a ship wi ago sail again, oh oh!

Despite the words of his 2007 hit song, local dancehall artiste 'Reanno' Gordon, more popularly known as Busy Signal, is back in confinement.

Following on the Jamaican proverb, it is a case of cock mouth killing cock, as according to www.rrrmusic.com, the artiste did brief time on conspiracy charges in the United States circa the early 2000s.

Depending on the severity of the charges and possible conviction, it is possible Busy Signal will be behind prison bars and not able to Step Out (his 2005 breakout hit) for a while.

In one of his songs, Jail, the St Ann-born artiste laments the perils of being incarcerated, particularly the possibility of men forcing themselves on you:

In verse one of Jail, Busy Signal deejays, "you can't snitch 'cause any day you come a road a war." Sceptics will surmise that in order to get a lighter sentence, though, he may have to revisit that principle.

The arrest will shock fans as Busy Signal has always provided conscious and uplifting lyrics. In Not Going Down, he spurts resilience, "We not going down, and dem huff an dem a puff and dem a frown. Can't tek di ghetto youth dem fi clown...". Meanwhile in Too Much Gun, he advises the youth, "Betta yu cool, likke yute an guh a school, nuh badda pick up nuh tool, mi a beg dem".

On Tic Toc, he tells the women: "You know that I like what you do when you to that, from the floor to the bed to the rooftop, I'll work you like a nine to five, to keep the vibe alive."

Lyrical prowess and a strong 2011 aside (which included the hit track One More Night), the singjay's future is now in doubt.

Busy Signal has released three albums to date: Step Out in 2006, Loaded two years later, and the most recent, D.O.B. The artiste also started his own clothing line, Turf Gear.