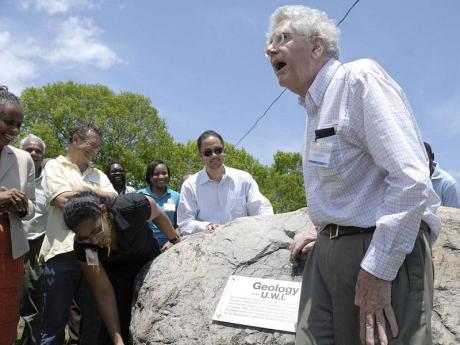 The Geology Department at the University of the West Indies, Mona, literally marked a 'milestone' in its history last week Friday.

One of the original teachers, Ted Robinson, recalled that the old building was made of wood and had a leaky roof. The department moved in 1965, but "we had to strip the old one of all the furniture because we didn't have any," Robinson joked. Current head of the department, Professor Simon Mitchell, said the boulder comes from Newcastle in the mountains of Jamaica, and came down to the flatter lands during a big debris flow, perhaps a few thousand years ago when Jamaica was full of volcanoes. He surmised that the rock is about 50 million years old. Mitchell noted that similar boulders had been found as far away from the area in what we now call Half-Way Tree.

"They (that type of boulder) were very good for construction, so people would break them up and use them to build roads. There are very few of them like this one that are still intact," he said. The first head of the Geology Department, Professor Kevin Burke, did the unveiling.

Linking past and present

"I am leaning on the rock, not out of disrespect ... but because I'm not very good at standing," he laughed. Burke expressed his joy at seeing the boulder, noting the link to the past of UWI's teaching of the influential science. Campus Registrar Camille Bell-Hutchinson, who playfully called the boulder 'Ricky', promised the boulder would be an attraction whenever the UWI Mona hosts sightseeing tours."We are a historic campus and this just adds to that."