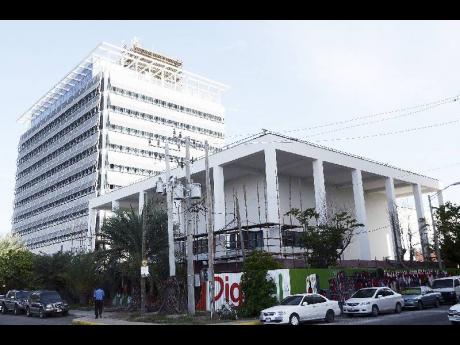 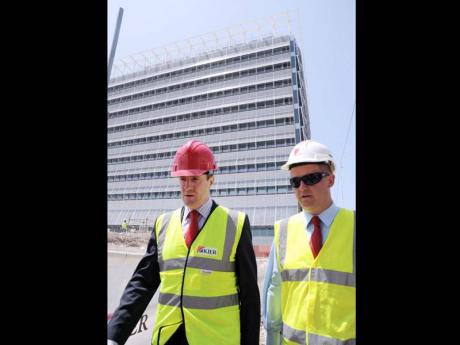 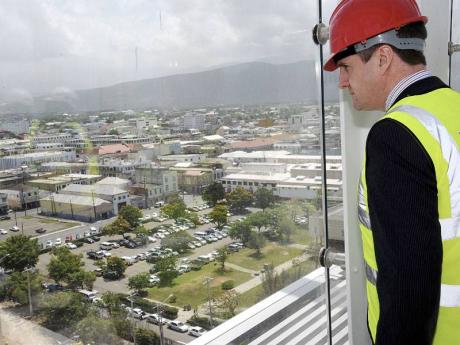 Digicel CEO Mark Linehan takes a look at the city from the roof of the company's new building in downtown Kingston. 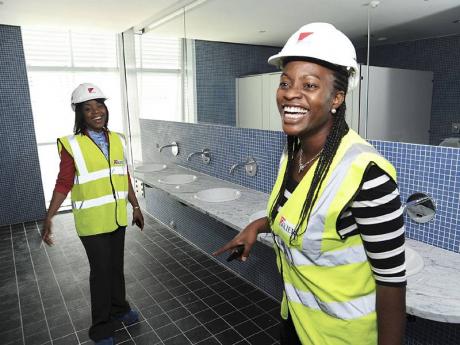 Whatever they found in this bathroom was enough to leave two members of the Digicel staff beaming. 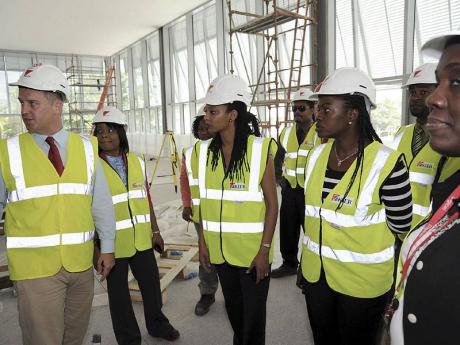 With construction seemingly on track to meet its August timeline, telecommunications giant Digicel has started to familiarise its staff with the downtown Kingston building that will be their new home.

During a tour of the nearly completed facility last week, staff members were upbeat as they had their first look at the 11-storey building under construction.

"This is just fabulous!" said one staff member as she walked through the area that will house the lobby and a megastore.

"I just can't wait to move in," the staff member added with a big smile as she toured the facility.

A destination-controlled elevator took the touring team to level two of the building which will house the customer care centre. The touring party was introduced to the hi-tech sensors which will automatically regulate light and temperature in the building.

While the facility will include a food court, there is a kitchen on each floor and state-of-the-art bathrooms with sensor taps.

A gym, pharmacy, first-aid station and other facilities are in the annex to the building, creating a full-service complex for Digicel staff and customers.

Chief Executive Officer Mark Linehan was as impressed as other line staff as he took part in the tour.

"I'm very impressed with the speed that the construction is being done," Linehan told The Gleaner.

He said moving into downtown Kingston, out of the New Kingston office it has called home since it set-up shop in Jamaica, will be a win-win for Digicel and the community.

"We are looking forward to integrating with the community and helping to rejuvenate the heart of the city," said Linehan.

"With more than 1,000 staff members moving downtown, this will be good for the area and there are lots of activities downtown that our staff will engage in," added the Digicel CEO.

"This is a great opportunity for businesses in downtown to grow and there will be a wider economic spin-off into the local community as our staff moves in."

That was immediately obvious as members of the tour party sought details on places where they could get lunch as soon as the tour was done.

One staff member travelled to East Queen Street and John's Lane where a restaurant prepares some of the best natural juices and punch to be had anywhere in Kingston.

Linehan admitted that some staff members had expressed concern about moving into downtown, but that is an issue that every entity moving into the community faces.

"There are concerns from some people about moving into a new environment, but we will be moving closer to the people who are our customers and we are confident that once people move into the new building they are going to love it."

"We are depending on the Government and the police force to ensure that the right plans and policies are in place to address this," said Linehan.

"While we fully encourage other organisations to join us and invest in downtown Kingston, to help us to redevelop and restore this city to its former glory, we also implore the Government to continue to ensure that the city has the right support facilities for businesses and their employees," Linehan said during an investment forum in downtown Kingston.

With crime down in the city and familiarisation tours now taking place, it seems the fears of some staff members are already going away.

"I just can't wait to move down," declared a staff member to cheers from colleagues.