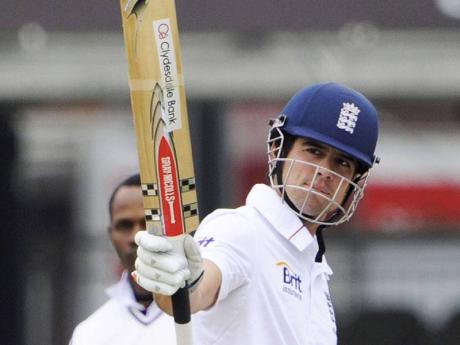 A spirited West Indies gave England a small scare, but the world number one side easily shrugged it off to coast to a five-wicket win in the opening Test here yesterday and take a 1-0 lead in the three-match series.

The Caribbean side was in with a shout when England stumbled to 57 for four inside the first hour, after resuming the final day on a precarious 10 for two in search of 191 for victory.

However, opener Alistair Cook stroked 79 and Ian Bell an unbeaten 63 to nullify the Windies threat and steer England to a comfortable win at Lord's.

The leading bowler with three for 60, the right-armer struck in the sixth over of the morning when he had Jonathan Trott caught at second slip by captain Darren Sammy for 13 to leave England 29 for three.

The dangerous Kevin Pietersen threatened briefly when he pulled a short ball from fast bowler Shannon Gabriel for his only boundary in scoring 13.

He fell to the next delivery, however, bottom-edging a pull at Gabriel through to wicketkeeper Denesh Ramdin, on the brink of the first hour of play.

Cook and Bell then came together to add an invaluable 132 for the fifth wicket to halt the decline.

The left-handed Cook faced 127 balls in 197 minutes and struck 10 fours, while Bell faced 103 balls in just over two hours at the crease and counted five fours.

Cook, resuming the day on nought, was cautious but positive and gathered the majority of his runs through the off side from a mixture of drives and cuts. He moved to his half-century in style just before lunch, pulling Sammy for four before cutting Samuels for another boundary to bring up his landmark.

Bell, meanwhile, remained steady and kept the score ticking over by rotating the strike. He reached his half-century of the match in style by coming down the track and smacking off-spinner Marlon Samuels back overhead for four.

The pair appeared poised to take England over the line before Cook flashed medium pacer Darren Sammy to Kirk Edwards at gully, with two runs needed for victory.

Bell formalised the result, however, working the first ball of the next over from Samuels to the midwicket boundary.

West Indies will face England in the second Test in Nottingham starting on Friday.

Man of the Match: Stuart Broad.