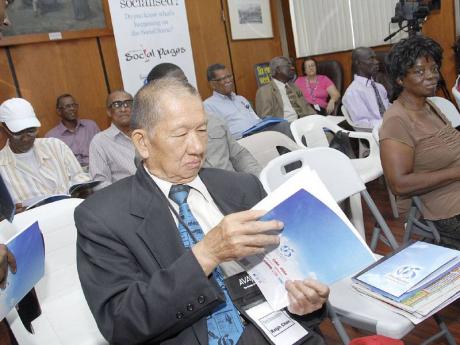 Ralph Chen is seen as something of a champion for minority shareholders, inside the annual general meetings (AGM) of large listed companies, so it perhaps explained his communication to the Pan Caribbean Financial Services' board.

His apology for absence featured prominently at PanCaribbean's mid-morning AGM in New Kingston on Tuesday.

As it turned out, Chen was otherwise engaged at another side of town. He decided that, given a clash of schedules, he would choose to participate in The Gleaner Company's AGM nearer to the heart of the city, according to the message relayed to the meeting by corporate secretary Gene Douglas.

The apology sparked off a mini-debate.

Yesterday, three different companies had scheduled AGMs: PanCaribbean at 10 a.m.; Gleaner at 10:30 a.m. and Sagicor Life Jamaica at 3 p.m. - forcing shareholders in the first two companies to pick one morning meeting to attend.

"At this moment, there are two AGMs taking place. When I called the stock exchange they told me there is nothing unusual about that. I asked them what am I to do if I am a shareholder of both companies," said one PanCaribbean shareholder.

"Am I supposed to cut myself in two so that one half can come to PanCaribbean AGM and the other half go to Gleaner? That is what I asked the stock exchange."

Said another: "The fact that it keeps happening makes the whole thing worse."

JSE general manager Marlene Street Forrest agreed that the concerns over meeting clashes were valid, and said it was "something we should work on" as part of the development of the stock market.

As it now stands, there is nothing in place to coordinate the scheduling of meetings to avoid overlaps.

AGMs are rostered by the board of directors of each listed company, independent of the stock exchange, Street Forrest explained.

According to Appendix 3, Subsection 7 of the Listing Agreement, each company is only required to "notify the exchange at least 21 days in advance of the date upon which the company's annual meeting will be held in each calendar year" - nothing more.

"The issue will be one of scheduling and communication," said the JSE manager. "It is something we are taking on but we have not thought through it as yet."