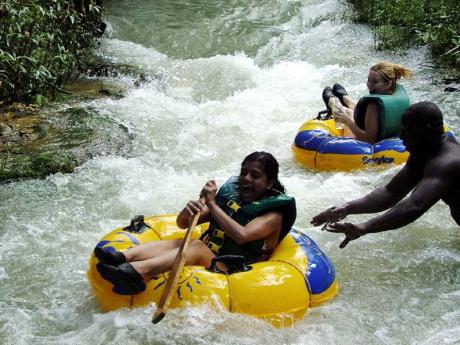 Pan Jamaican Investment Trust shelled out US$4 million (J$351 million) for its 20 per cent shareholding in tour operator Chukka Caribbean controlled by the Melville family.

The move was initially announced last week but the price remained undisclosed until directors from both entities met at Pan Jam's New Kingston head office on Monday.

"Our investment is US$4 million," said Pan Jam president and Chief Executive Officer Stephen Facey following the meeting with Chukka. "We discussed it while making coffee and they (Chukka) did not have an issue with sharing the information."

The deal essentially prices Chukka Caribbean at US$20 million (J$1.76b).

He, however, declined to disaggregate both companies' income.

"Revenues are on track but could be a little more," he said, adding that the group wants to grow its annual tour subscribers to 600,000 persons in five years.

"It's been two years now that we have been looking at a company to partner with us for the next stage of our growth. This group was totally in line with where we want to head. We are building a brand that will go outside the Caribbean in years to come. The people at this table have the same vision as we do," he told Wednesday Business during the joint interview with Pan Jam on Monday.

Chukka operates over 50 tours in Jamaica, Belize and Turks and Caicos, marketed to cruise and hotel guests. It plans to expand into another unnamed Caribbean territory shortly, using the equity capital from Pan Jam.

"These funds are coming in to be deployed immediately. It's a combination of expansion in some of the markets we are already in as well as investment in new markets," said John Byles, co-managing director at Chukka. "We will respectfully decline to say where we are heading."

Byles said that Chukka has no immediate plans to float its shares on the Jamaica Stock Exchange.

"Maybe at some stage but that is not now under consideration. We are not at the point yet; there is still more growth to achieve without going public," he said.