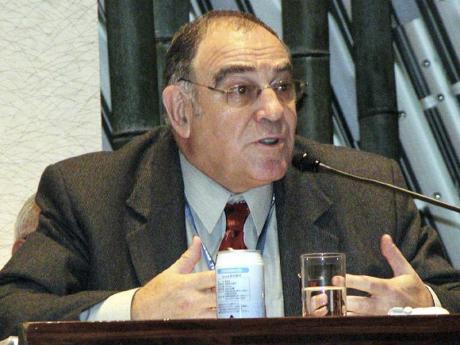 The Calabash International Literary Festival has always embraced a revolutionary ethos, and in 2012 as the acclaimed festival celebrates Jamaica's 50th year of Independence with Jubilation 50, it will do so again. Calabash 2012 returns to Jakes in Treasure Beach from Friday to Sunday, and will take audiences on a tour of the mind of South African revolutionary Ronnie Kasrils.

Kasrils, author of the best-selling memoir Armed and Dangerous, will be engaged in conversation by Paul HoldengrSber, director of public programmes at the New York Public Library, in the segment dubbed 'Reasonings Presents: A Real Revolutionary'.

The HoldengrSber-Kasrils combination should make for exciting discussion covering Kasrils revolutionary life that has embraced the power of both the pen and the sword, beginning with his fight against the South African Apartheid regime.

Kasrils joined the African National Congress (ANC) in 1960, where he served as the secretary of the ANC-aligned Congress of Democrats in Natal until it was banned in 1962. He became a member of Umkhonto Wesizwe (Armed Wing of the Liberation Movement) at its inception in 1961 and he and his wife fled into exile in 1963. They were exiled for 27 years. Kasrils worked underground for the ANC in South Africa during Operation Vula.

After the first democratic elections in South Africa, Kasrils engaged in years of service as a member of the South African government. He was appointed deputy minister of defence (1994-1999) and later became minister of water affairs and forestry (1999-2004) and was appointed minister of intelligence services. He resigned on September 23, 2008 following former President Thabo Mbeki's resignation.

Kasrils is also author of the award-winning The Unlikely Secret Agent, published by Jacana Media, which is the biography of his extraordinary wife, Eleanor. He has published poems under his nom de guerre, A.N.C. Khumalo, short stories and many articles in numerous journals. He co-authored Bertrand Russell's America in two volumes (Allen & Unwin 1973 and 1984) about the British philosopher.

Intense and inventive conversation has become a long-standing element of the festival, and for two years HoldengrSber has engaged some of the world's best minds in talks about their works, their politics and the world we live in.

Before coming to the New York Public Library, HoldengrSber was founder and director of the Institute for Art and Cultures at the Los Angeles County Museum of Art.

Jubilation 50 will also present a 'joyfest' of readings comprising more than 30 poets, authors and performers from Nigeria, Ethiopia, the United Kingdom, the United States as well as several Jamaican writers from home and the diaspora.

More information on the programme and participants are on the website www.calabashfestival.org See also the Calabash Jamaica Facebook page.