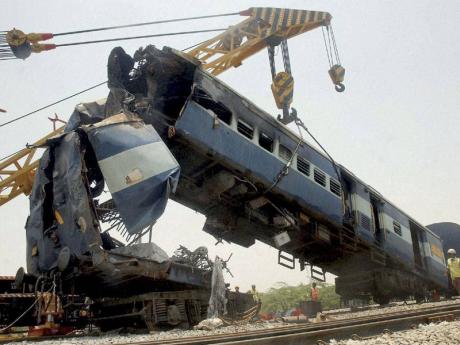 A crane lifts the wreckage of a train after an accident at a station near Penukonda, about 170 kilometres (105 miles) north of Bangalore, India, yesterday. A passenger train rammed into a parked freight train and burst into flames before dawn Tuesday, killing more than a dozen people in southern India, officials said. - AP

A passenger train rammed into a parked freight train and caught fire before dawn yesterday in southern India, killing at least 25 people and injuring dozens more.

Rescuers worked for about six hours to pull some 70 survivors from the twisted and smouldering wreckage near the southwestern border of Andhra Pradesh state.

"When the train stopped with a loud bang, I got down to see burning passengers crying for help," Munijayendra, a 25-year-old marketing executive who goes by one name, told Press Trust of India. "The worst part is we were helpless, as the heat was just unbearable."

At least 40 people were hospitalised with injuries, with about 10 in critical condition, local police chief Charu Sinha said.

The driver of the Hampi Express, upon seeing the cargo train stopped on the tracks ahead, slammed on the emergency brakes, which caused four cars of the Express to derail, officials said.

The first passenger car caught fire, burning to death 16 people who were inside, Sinha said.