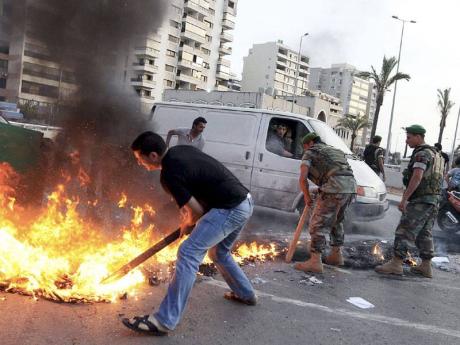 Lebanese security forces supervise the opening of a street blocked by Shiite Muslims in a southern suburb of Beirut, Lebanon, yesterday, to protest against Syrian rebels kidnapping of 12 Lebanese Shiite pilgrims in the Syrian northern province of Aleppo. The leader of Lebanon's Hezbollah militant group Sheik Hassan Nasrallah has appealed for calm following the abduction of 12 Lebanese Shiites in Syria. - AP

Princess Estelle, the heir to the Swedish throne, was baptised yesterday amid pomp and pageantry in the chapel of the Royal Palace in Stockholm.

Some 550 guests, including royals from Scandinavian countries and The Netherlands, witnessed the ceremony, which was broadcast live on television in Sweden and neighbouring Denmark and Norway.

The three-month-old princess, whose full name is Estelle Silvia Ewa Mary, is second in line to the throne as the first-born child of Crown Princess Victoria, 34, and Prince Daniel, 38.

Dressed in a christening gown previously worn by both her mother and grandfather, King Carl XVI Gustaf, Estelle rested comfortably in the arms of her parents during the hourlong ceremony. The chapel was decorated with apple-blossom garlands and yellow and white flowers.

Estelle remained mostly still as Archbishop Anders Wejryd poured water on her head from the chapel's 17th century silver font. The water had been collected from a spring on the island of Oland, where the royal family has its summer residence.