COJO presents scholarships to three wards of the State 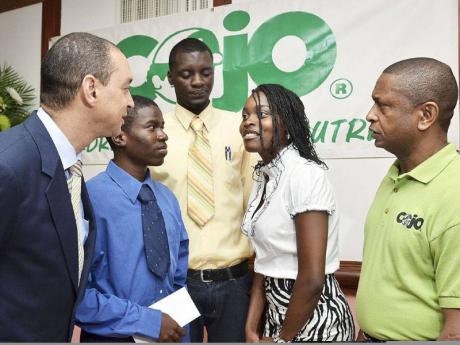 Twenty-year-old Rasheid Powell grew up in the Muirton Boys' Home in Portland and has high hopes of embarking on a career in media.

But Rashied's dreams were almost shattered due to a lack of finances to complete his studies in mass communication at Northern Caribbean University, where he is in his first year.

Powell, who was successful in seven subjects in the Caribbean Secondary Education Certificate examinations, said he thought his plans of breaking a cycle of poverty by furthering his education would come to an end after being unable to meet the financial requirements at the tertiary institutions.

Despite getting a stipend from a job he does on campus, along with assistance from other institutions, he was still finding it difficult to cope.

"It wasn't going too good for me in terms of finances, and so I was not able to do final examinations last semester. I didn't know where to get the money from, and so I made arrangements with my dean to do the examinations next semester," he lamented.

But Powell is among three proud wards of the State who yesterday received US$3,000 each, along with laptops from Children of Jamaica Outreach Inc (COJO), a United States-based non-profit organisation.

"I didn't know where the money was coming from to complete, but with the help of COJO, I am now back on track and can continue my studies," he said.

The other recipients are Samantha Mitchell and Frederick Gordon, who are in their first year at Bethlehem Moravian College and Moneague College, respectively.

Speaking during a scholarship luncheon at The Jamaica Pegasus hotel in New Kingston where the awards were handed out yesterday, GraceKennedy Group CEO Don Wehby zeroed in on the lack of care for some of the nation's children, saying not much has been done to rescue them when they are in need of proper care and protection.

Wehby said while there was legislation to protect children, action to support this has fallen short.

"The Vision 2030 National Development Plan tells us that out of the nearly one million Jamaican children, roughly 37 per cent of them are among the most abused, the most vulnerable, and the poorest. If Jamaica is to be the place of choice to live, work, raise families, and do business, we need to address that," he argued.

Wehby added that the care and protection of children was an issue that goes beyond what parents and guardians do or don't do.

"This is society's responsibility. An old African proverb tells us that it takes a whole village to raise a child. It means that the entire community must look out for the interests of children. I am not certain we have stayed true to this," he said.

Wehby said the National Parenting Policy tabled in Parliament last year was one way to elevate the crucial issue of parenting on the national agenda so that it could get the attention it deserves.

COJO's mission is to help improve the health, education, and general well-being of underprivileged children.

Over the past decade, the volunteer-driven organisation has supported a number of institutions in Jamaica as well as the United States. Among them are the Alpha Boys' Home, the Glenhope Place of Safety, and the Marigold Child Care Centre.

Founder and chairman of COJO Gary Williams said the organisation has so far given US$17,000 in scholarships to persons in institutions so that they could complete their studies at the tertiary level.