Gleaner unveils new components of its digital strategy at AGM 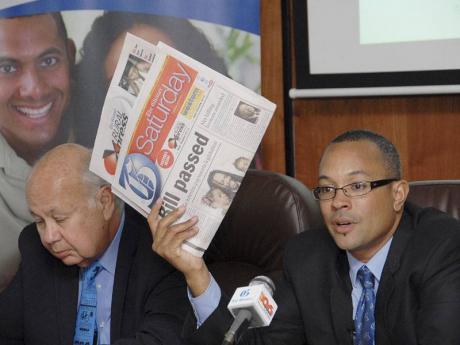 The Gleaner Company yesterday indicated it was accelerating its transition to a broad-based media group, paying greater attention to its emerging digital properties.

But Managing Director Christopher Barnes made it clear that it was not about to jettison its "old media" businesses, including its flagship Gleaner newspaper.

"We have changed the print-centred culture to the multimedia culture. Digital is here to stay," Barnes told shareholders at the media group's annual general meeting (AGM) at its North Street, central Kingston, headquarters.

"But the paper is also here to stay," Barnes added. "What we have to do is make sure that all of them (products) stay in a way that contributes to the bottom line to create shareholder value."

Barnes has been The Gleaner Company's managing director for 16 months. During this time, he has championed the embrace, as potential profit centres, of the Internet and other new-media technologies by one of the Western Hemisphere's longest-surviving newspaper companies.

For instance, at the AGM, he unveiled enhanced Gleaner and STAR applications for BlackBerry devices and also highlighted other custom formats and applications for smartphones and tablets. He also displayed an online digital facsimile, or epaper version, of the Gleaner's daily. He would later give AGM attendees free access to this until the formal launch, expected shortly.

Barnes further announced that The Gleaner's video platform was recently enhanced to allow for the integration of paid video commercials. This was touted as a way for clients to gain greater exposure, at low incremental cost, for their brands, products, and services on the Gleaner's extensive video inventory. This service is immediately available.

Additionally, The Gleaner has developed an online service, www.gofirstlook.com, where paid member clients can upload their press releases. This service he said, would be offered free of charge for a limited period.

Barnes also announced that The Gleaner Company would soon be launching an independent data and information website, digjamaica.com (Digital Infor-mation Gleaner), which he described as an enhanced electronic version of the Jamaica Handbook.

"Four years ago (just after joining the Gleaner as understudy to Chairman Oliver Clarke, who he succeeded as MD), our website would have been a reflection of what is in the paper," Barnes said.

"Now, what we see is a living, breathing, dynamic animal that looks to break news first online, instead of waiting for the 24-hour print cycle," he said.

Although the print products still produced greater than 90 per cent of The Gleaner Company's 2011 revenue of J$3.17 billion, Barnes indicated that the digital strategy is working.

Online revenue, he said, has grown over the past two years "by double digits", whereas that for the group as a whole has been flat, and the online segment of the business has been "paying its way".

However, the potential of its 'new media' segment notwithstanding, in Jamaica's recession-hit economy, The Gleaner Company, like other media operations, has found it difficult to return large profits.

Last year, for instance, in the absence of more than $468 million it booked as income in 2010 from its discontinued defined benefit pension fund, The Gleaner returned net profit of $118.5 million - down from $430.7 million.

Barnes, however, pointed out that media earnings tend to be softer in the first quarter and that the company has seen some improvement, a momentum which he will push to maintain.