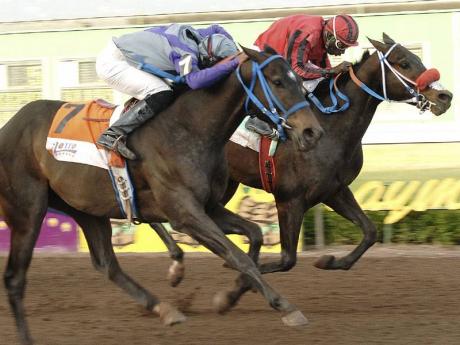 In a driving finish, AVENTURA (left), with Richard Mairs aboard, holds off highly fancied ALL CORRECT (Shane Ellis) by a neck to win the $3.3 million Lotto Classic for the Governor's Cup over 2000 metres at Caymanas Park on Saturday, only to be disqualified following a stewards' inquiry for causing interference to the fourth horse, RAGING PROSPECT, a furlong out, and the race awarded to ALL CORRECT. - Colin Hamilton/Freelance Photographer

IT'S holiday racing at Caymanas Park today, the nine-race programme featuring the $600,000-$550,000 claiming race for the Labour Day Trophy over 1200 metres.

Among the nine starters is the super fast MR. SKILL, who bids for a hat-trick of wins with customary rider Shane Ellis riding for trainer Lawrence Freemantle.

The evergreen seven-year-old gelding, by Alisios out of Unnatural, has been allotted topweight of 57.0kg in search of his ninth win from his last 11 starts and given his unsatiable winning appetite, is not to be taken lightly.

MR. SKILL will face proven campaigners as SI PUEDO, TRIAL LAWYER, ONLY BEGOTTEN SUN and, not least, THE GUARDIAN, who steps down in class to vie for this trophy.

It is interesting to note that in all of his post-to-post wins, MR. SKILL is yet to score beyond 1100 metres. Being a bit out of his comfort zone today, he could just fall victim to THE GUARDIAN, who won't be far away under leading jockey Dane Nelson or, for that matter, SI PUEDO who beat MR. SKILL decisively when they last met over 1100 metres on December 21.

THE GUARDIAN, however, has better credentials and should take home this trophy.

Trained by Victor Williams, the seven-year-old gelding last won over 1300 metres on a $550,000 claiming tag on December 31 and was claimed out of that race by his trainer on behalf of O'Shaun Connection. He is yet to win in six subsequent races in overnight company, but has run some big races in defeat.

Best of these was his good second to then unbeaten American three-year-old colt BLAST THEM AWAY in the Ash Wednesday Trophy over 1300 metres, beating the third horse DON GEORGE by 1 1/2 lengths in what was a fast-run race.

THE GUARDIAN also finished a close second to NEW KINGSTON in another fast-run race over 1100 metres in February. Now back among his peers (high claiming), he should resume winning ways from the convenient mark of 54.0kg.

Expect THE GUARDIAN to race in touch of the leader MR. SKILL and SI PUEDO before coming through for victory in the last furlong.

Other firm fancies on the card are IMPERIAL FORTUNE with Nelson in the opening race over 1820 metres for maiden three-year-olds; SHYANA to rebound in the third again over 1820 metres; AQUAMOTO in the fourth for three-year-olds and up, as well as hat-trick seeker NOON IT IS to beat old rival PALACE GOLD by a narrow margin, this time in the open allowance race over the straight five course.