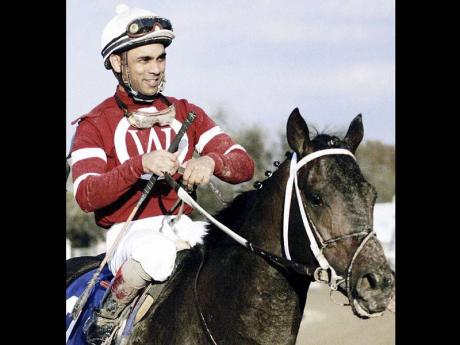 Riding on Saturday's 11-race card, Bridgmohan won the US$58,000 race four aboard Vivo Per Lei, before returning to the winners' circle with the favourite, Moon Traveler, in the $53,000 race eight.

The day was a good one for Bridgmohan, who also finished second on three occasions.

He then kept up his good form on Sunday's 10-race card, scoring in race six with the favourite Parade of Homes and in race seven with 4-1 chance Rio Strikes Gold.

The 32-year-old reinsman has 19 wins for the young season, four clear of Corey Lanerie, with Calvin Borel a further two back in third.

On Sunday, Bridgmohan was forced to wait a while before finding his first winner when Parade of Homes beat the three-year-old and upward fillies and mares over 6-1/2 furlongs.

He overcame a bump at the start to stalk the leader Bonita Muneca from second off the inside. Once in the stretch, Bridgmohan set the five-year-old mare down for the drive and she responded well to grab the lead and race to the finish 5-3/4 lengths clear.

Bridgmohan's second win was a dominant ride with Rio Strikes Gold, as he made all the running in the seven furlong trip to win by three lengths.

Racing again just off the inside, Bridgmohan steered the four-year-old bay gelding through brisk fractions of 22.97 seconds for the quarter-mile, before completing the half-mile in 46.25.

In the stretch, Bridgmohan had put the gelding already three lengths clear and the pair proved best at the wire.