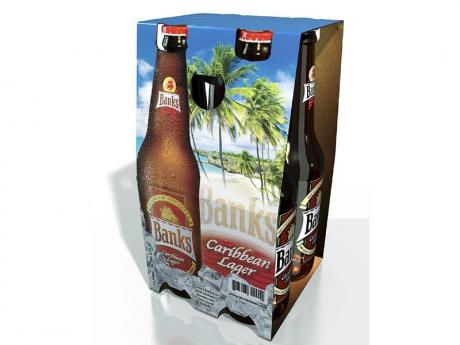 BANKS BEER will be sold in the United Kingdom (UK) at one of the leading retail outlets there under the brand Banks Caribbean Lager Beer. The beer will be sold at Tesco stores.

UK distributor, Richard Bateson, the business manager of the Craft Beer Company, had this to say about the deal.

"We are very excited about the relationship we are building with Banks (Barbados) Breweries Ltd and are looking forward to a fruitful and long-term relationship," Bateson stated.

He confirmed that Banks Caribbean Lager Beer will be available in "the larger Tesco stores - Extra and Superstores - which total around 195".

And there is more. Tesco Ireland will be listing Banks Caribbean Lager Beer for a two-month promotional period and, if successful, it will remain in the stores and be part of a three-times-a-year promotion.

"Word out of Ireland is that they have ordered three pallets to start the promotion in May and June," explained Chee-A-Tow, "and our beer is listed in two other retail outlets in Ireland!"

Banks Breweries already exports to the region, as well as to select states of the eastern seaboard of the USA year round, and to Canada during the spring-to-summer period, through the Liquor Control Board of Ontario. At the recently concluded Banks Caribbean Lager Conference, roll-out plans were finalised for new markets like the UK, Georgia, North Carolina, Maryland, and select markets in Europe, this coming spring.

Group marketing manager of Banks Holdings Ltd, Bernard Frost, said: "The entry of Banks beer into the UK during this 50th anniversary of Banks Breweries is fantastic not only for the Banks brand, but for our friends in the UK. The UK represents a key market for the Banks brand as it continues its quest to be a truly global brand, and it is an important entry point for us as we map our penetration into the wider European market. As for our friends in the UK, they will still need to visit Barbados to enjoy our sunshine, beaches and people, but now they can enjoy our Banks beer right at home."