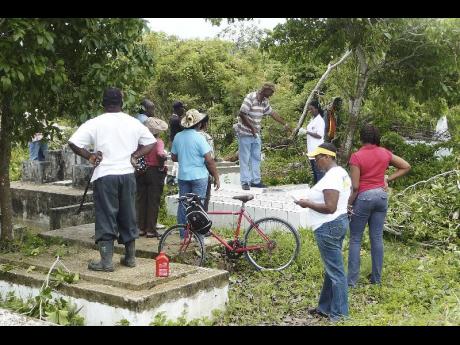 Residents of Lucea, Hanover, take part in trimming of overhanging tree limbs during a beautification exercise at the Lucea Cemetery. - Photo by Christopher Thomas 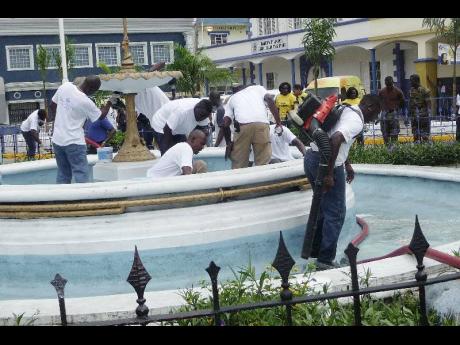 Volunteers from Secrets Resort and Spa in Montego Bay do cleaning and repainting of the Sam Sharpe Square fountain, part of St James' parish project for Labour Day. - Photo by Christopher Thomas 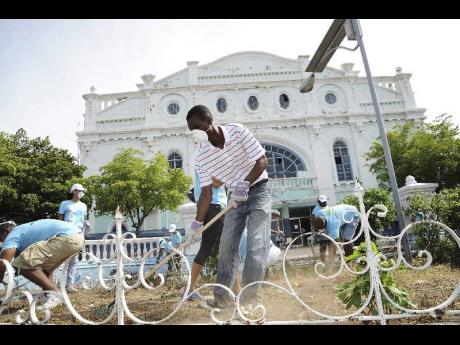 Members of staff of Flow Jamaica carry out clean-up work near the Ward Theatre in downtown Kingston. - Photos by Ricardo Makyn/Staff Photographer 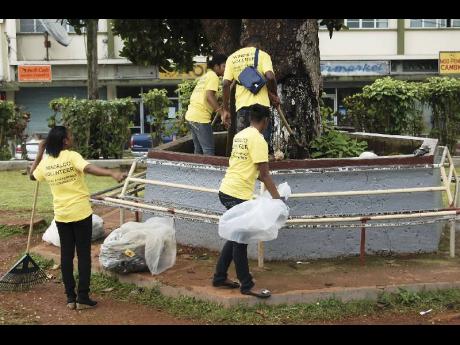 Volunteers from Windalco hard at work at the Mandeville Park in Manchester. - Photo by Dave Lindo 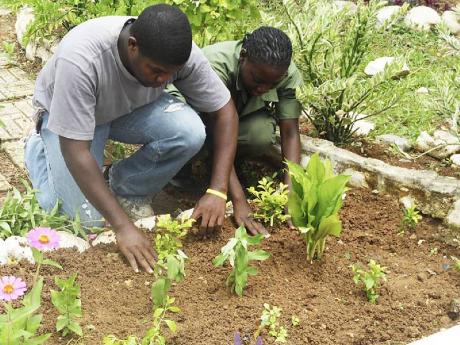 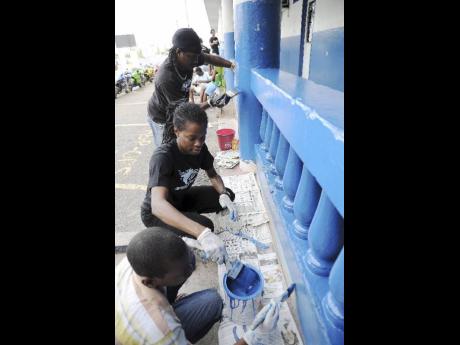 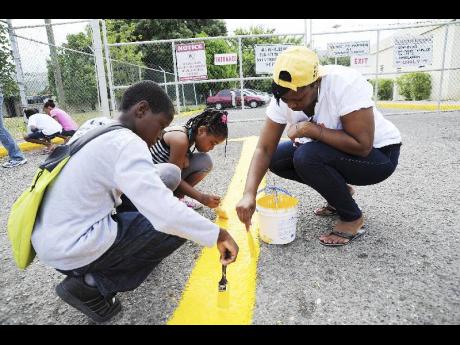 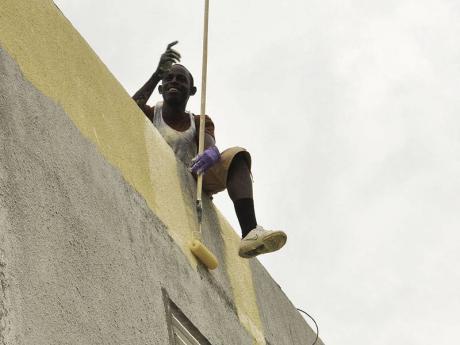 Constable Ryan Hutchinson sits atop the Freeport Police Barracks in Montego Bay as he paints the facility with paint donated by the St James Police Civic Committee for their Labour Day project. - photo by Janet Silvera 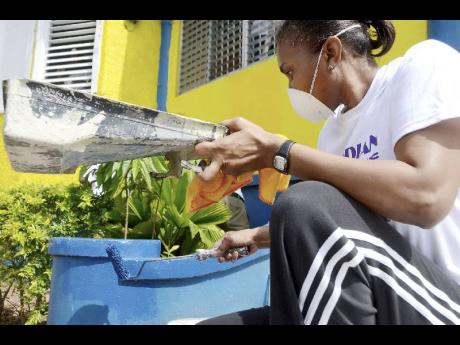 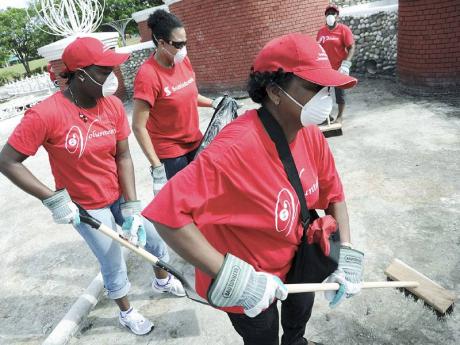 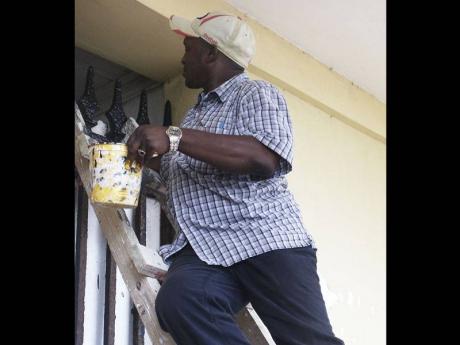 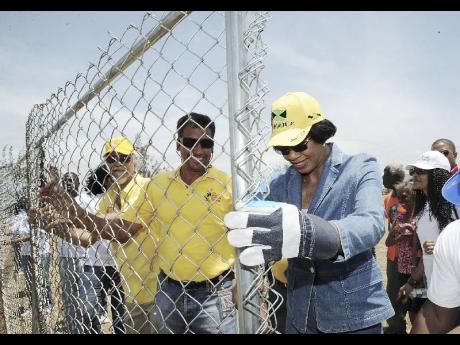 Prime Minister Portia Simpson Miller (right) is assisted by Christopher Levy (centre), president and CEO of the Jamaica Broilers Group, which, through its Best Dressed Chicken brand ... See below for full caption 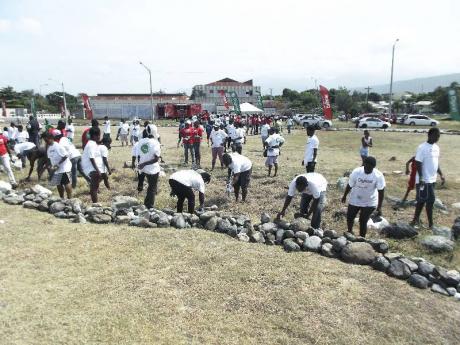 Residents of central Kingston and staff volunteers from the Digicel Foundation engage in a beautification project at the roundabout located at Harbour Street, downtown Kingston. - Photo by Chad Bryan 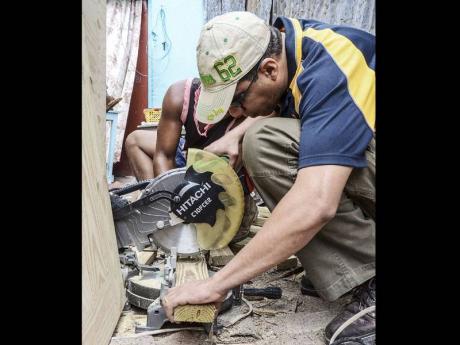 Opposition Leader Andrew Holness assists with the rebuilding of a house for an elderly resident of St Paul Lane in Olympic Gardens in St Andrew as part of yesterday's Labour Day activities. - Contributed
1
2
3
4
5
6
7
8
9
10
11
12
13
14

Jamaicans turned out yesterday to undertake hundreds of projects across the island as part of the annual Labour Day activities.

Prime Minister Portia Simpson Miller led the way when she joined scores of volunteers who turned up to give the National Heroes Park in Kingston a facelift.

The National Heroes Park - the centrepiece of the nation's heritage - was the National Labour Day Project for 2012.

After cleaning the bust of National Hero Marcus Garvey and planting a tree on the eastern side of the park, Simpson Miller hinted to reporters that plans are being put in place to ensure that the facility is constantly maintained.

"I'm not going to say anything now, but it's refreshing to see private-sector partners coming in and trying to help," she said.

Simpson Miller was referring to the Jamaica Broilers Group which, through its annual Fun In The Son concert series, donated a fence that was erected near the southern end of the park.

The central Kingston communities of Rae Town, Tel-Aviv and Southside also received a facelift with assistance from the staff of the Digicel Foundation.

Member of parliament for the area, Ronald Thwaites, joined Digicel staffers and residents as they engaged in several projects to beautify the communities.

"Today is only one phase in a bigger initiative that the Digicel Foundation has in store for the communities of central Kingston," said Lisa Lewis, chairman of the foundation.

Over in St James, several residents came out to clean up Sam Sharpe Square in Montego Bay.

The activities started with a civic ceremony in which a floral tribute was laid near the statues of Sharpe and his followers.

After the ceremony, the volunteers went to work, cleaning the fountain and repainting the areas around it, including the Civic Centre.

Over in Clarendon, students and teachers at Spalding High School used cement to repair the roadway leading to the institution.

The road had been in a deplorable condition for some time.

The Lucea Cemetery was the centrepiece of the Labour Day activities in Hanover.

Mayor of Lucea Shernet Haughton acknowledged that the cemetery was in "very bad condition".

"It is very deplorable. That is why the Lucea Cemetery was chosen as the main parish project," said Haughton.

The St Elizabeth branch of the Social Development Commission said 79 projects were registered across the parish.

CAPTION: Prime Minister Portia Simpson Miller (right) is assisted by Christopher Levy (centre), president and CEO of the Jamaica Broilers Group, which, through its Best Dressed Chicken brand, is the title sponsor of the Best Dressed Fun In The Son gospel festival, and Tommy Cowan (left), managing director of Glory Music and co-producer of the festival, in installing a section of the 1,000-ft permanent fence at National Heroes Park as part of the National Labour Day Project. The permanent fence will be a gift to Jamaica by the Best Dressed Fun In The Son gospel festival, which will be held this year at the park on July 14. - Ricardo Makyn/Staff Photographer