My 'P' is for performance, not pork barrel politics 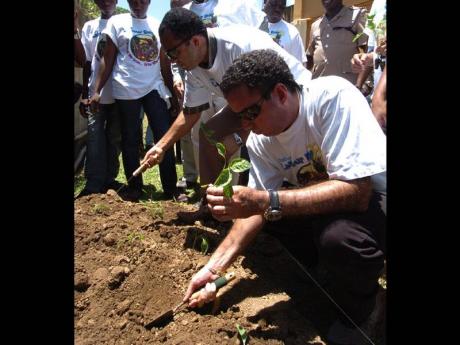 In this May 2008 file photo, Member of Parliament for West Portland, Daryl Vaz (foreground) plants pepper seeds with then Minister of Agriculture Christopher Tufton. The event was the National Labour Day Project at the Buff Bay High School in Portland. - File 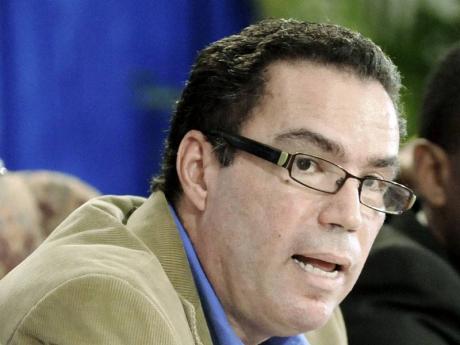 I make reference to your editorial of Monday, May 21, 2012, titled 'Seeking Ramparts Around the CDF Trough' in which you have singled me out by name and placed me atop a list of politicians who have come out in support of the Constituency Development Fund (CDF), especially where it refers to the troubling planned cut from $20 million per constituency to $14.7 million.

Based on your criticism of the CDF since its inception, it is not surprising that you have once again done so without one iota of evidence that you have done any research into my CDF spending. I find it appalling, but not surprising, that you could begin the lead-in to your editorial with, 'There is never a pork barrel in whose grease politicians don't want to slither and around which they do not hope to build ramparts. Ask Daryl Vaz.'

Obviously, I cannot speak on behalf of other constituency representatives, but like my father before me, who left private enterprise in the turbulent 1970s in an effort to serve the people of this country, I take the matter of people representation seriously.

It appears to me that maybe you were simply taking a generic stab at the CDF, and since you were already convinced, without investigation, that it was all about pigs wallowing in mud, to use your own words, you went to print in the effort to support your preconceived ideas of the CDF.

'Ask Daryl Vaz,' you say. Well, you have asked, and today I will now answer. As one who has adopted the maxim '100 per cent or nothing,' and as a politician who has been successful in all four elections contested since 1986, I have always believed that it is incumbent on me to do the utmost for my constituents and have always lived by the political motto 'Serve the people and they will serve you'.

Because of my involvement in private enterprise since I was relatively young, and because of the many needs of my constituents/constituency when I first entered West Portland in 2005, in addition to non-state funds and those I am able to source from private-sector interests, it might interest you to know that my net monthly pay as member of parliament (MP) - currently net $262,006.91 - is added to the pool of state funds that I spend in my constituency as part of the expenses that go towards the constituency that I represent through the West Portland Development Fund set up by me.

I have attached for your perusal an official document from the CDF Management Unit listing all CDF spent by me for the financial years 2008-2012. I will attempt to highlight some of the details of spending in my constituency, especially where it relates to what you refer to as 'pork', inferring that people like me use it to buy influence in the constituency and perpetuate 'patronage politics'. I challenge you to find another constituency that can claim the infrastructure development as West Portland has had in the past four years.

In terms of service, my constituency office in Buff Bay (the largest and most equipped of all 63) is permanently staffed by four people, including a dedicated vehicle with a driver to quickly respond to the needs of my constituency. In it are fax machines, telephones, computers and staff on hand to interact with my constituents who know that it is open five days per week when many other constituency offices across the island are open just one day.

Additionally, I have satellite constituency offices in Hope Bay so that I am in a better position to serve the people and negotiate the diverse topography which ranges from flat land to some of the most hilly terrain in Jamaica. Make no bones about it, West Portland is a difficult constituency to manage, especially its infrastructure, being as it is on one side of the Blue Mountain range.

In the 2009-2010 when the CDF per constituency fell by a whopping 50 per cent to $20 million per year, the amount spent in West Portland was $20.4 million. It comprised construction of 'V' drains in various areas ($6.5 million); asphalting of roads in areas like Caenwood, Forty Acres, Lennox, Hopefield, Vinery; roads etc, ($7.5 million) laying of pipes in places like Claverty Cottage, Ythandside to Mt Hermon Square and New Eden ($2.9 million) welfare and emergency ($1 million); social housing ($1 million); and Labour Day project of $250,000. You said ask Daryl Vaz. I have answered and look forward to your publication of my response.

In 2010-2011, the spend of $20.5 million was broken down in these terms. Road rehabilitation ($6.04 million), rural electrification and street lights ($3.95 million), road cleaning ($1.9 million), water supply projects ($1.6 million), educational assistance ($2 million), welfare and emergency ($1 million), social housing ($1 million), fertiliser project ($1 million), School programmes and farm road clearing of over $1 million plus other projects which are listed and are available at present at the Office of the Prime Minister if you really desire to get all the facts.

For 2011-2012, the scenario is no different. It's all about water supplies, drain construction, road cleaning, cemetery preservation, rural electrification, educational development, and welfare projects, most of which are considered 'pork' to you, but which are projects greatly appreciated by the communities and districts of West Portland which benefit.

I confess to you a certain selfishness. I strive to win elections, and I know the only way to do so is to give the best service I can to my constituents. It is for that very reason, as I have previously stated, the monthly administrative costs of running my constituency organisation exceeds my take-home salary as an MP. Because of the limited CDF allocation as against the demands, I have partnered and matched funds from the West Portland Development Fund with the Universal Access Fund and built and opened three computer learning centres in the three major townships, St Margaret's Bay, Buff Bay and Hope Bay, at a cost of $25 million. These have been turned over to the community-based organisations in order for them not to be politicised. I could go on and on.

To associate me with the editorial is to totally invent yet another Daryl Vaz. Not the Daryl Vaz whose constituency in the 2009 by-election polled the most votes ever by a candidate and highest margin of victory by any candidate in any election in West Portland when the Government was dealing with a recession. This could only happen because of the mutual trust, faith and admiration that have been established between the people of West Portland and me and the work that has been put in to uplifting and bettering the lives of all the people of West Portland.

Speak to the old people, the middle-aged, and the young. Look around you and ask questions. Ask about the 10 gifted children that I have been sponsoring in their educational pursuits because their parents cannot afford the expenses. Ask about the sports programme in netball and football. Ask about the Fruitful Vale water supply, which is to be implemented at a cost of $41,718,444; the Lynch Park Sports Complex, which is flood-lit and can be classified as the first flood-lit football field in the eastern end of the island. Ask about the Rock Hall Basic School as another major success among the plethora of projects implemented.

What I do not believe you are free to do, as a respected publication in Jamaica, is editorialise on a matter, use my name as some sort of infamous representative of that matter and do so freely without any semblance of journalistic enquiry. Certainly, that is not what took your publication to where it is now in the annals of Jamaican media.

Words are cheap, so don't take my word for it. Instead, accept an invitation from me (be prepared to spend a week, not days) to dispatch an investigative team of journalists to do an independent assessment of not only my CDF projects, but all other projects implemented (State and otherwise) in my constituency, and I will furnish you with whatever information you may require. This will allow your publication to be in a better position to editorialise again and report your findings, not from prior positions or in seeking 'sound bites' in a written publication, but with what you have determined is in fact so. Is that not true journalism?

Let me end by saying that there is indeed a lot of pork in Portland. Please feel free to visit anytime to eat the best jerk pork in the world at Boston, right here in Portland.