Bolt says start will be key at London Olympics 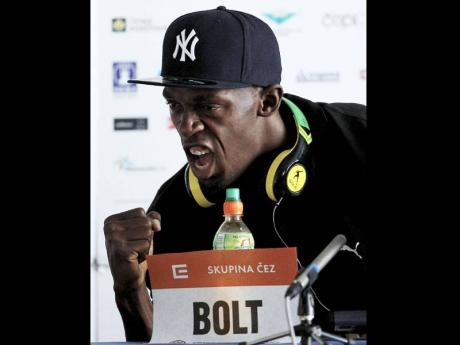 'As long as I'm in great shape, nobody beats me'

Usain Bolt is hoping to turn his only weakness into a strength in time for the London Olympics. The tall Jamaican sprinter has never been known for fast starts, so his main focus this season is to become quicker out of the blocks.

Having already smashed the World records in the 100 and 200 metres, Bolt anticipates what will happen if he gets the start just right in London.

"It should be a World record,'' he said, while looking ahead to tomorrow's Golden Spike meet in Ostrava. "We were working on my start. We were reviewing a few things and seeing what we can improve. Over time, my start gets better. I am very happy; my coach is very happy where I am start-wise.''

Last year, Bolt failed to defend his World title in the 100 in Daegu, South Korea, after he was disqualified for a false start.

"I know exactly why I false-started,'' he said. "I don't think it will be a factor at the Olympics.''

Bolt is the favourite to retain his Olympic gold medals in the 100 and 200, although the Jamaican is expected to face tough competition from countryman Yohan Blake, who won the World title.

Bolt doesn't seem to be bothered.

Bolt is unlikely to threaten his World record of 9.58 seconds when he runs the 100 metres tomorrow. He says he still has time to find his optimal form before London.

"All I have to do is to work on transition and technique,'' he said. "We have probably two months to get it right, so it shouldn't be a problem. I'm definitely on the right track.''

Bolt will be competing in the eastern Czech city for the sixth time and wants to improve his season best of 9.82 that he set on May 5 in Kingston, Jamaica.

The Golden Spike will be the first European meet for Bolt this season. He will also compete in Diamond League meets in Rome on May 31, and Oslo, Norway, on June 7 before returning to Jamaica for the national trials.

He plans to be back in Europe to run in the 200 at the Diamond League meet in Monaco on July 20, his last race before the London Olympics.

The fastest man on the planet was handed an unlikely defeat by young athletes at a 60-metre race in Ostrava yesterday - although he was running in jeans.