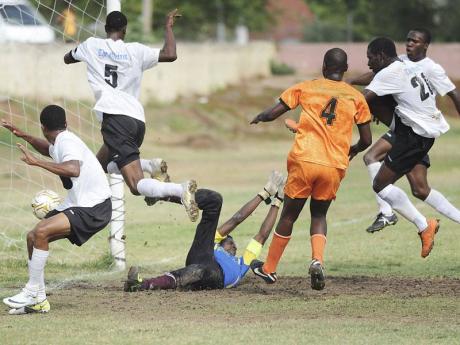 Cavalier are the early pacesetters in the fight for promotion to the Red Stripe Premier League after turning back Savannah 2-0 in their Jamaica Football Federation (JFF) Confe-deration play-off at Collie Smith Drive yesterday.

Cavalier, who are in the play-offs for the third consecutive year, got their goals from Nigel Reid (24th) and Damion Jackson (74th).

This was Cavalier's second win from as many games, which took them to six points, while Westmoreland-based Savannah remain second on three points, having defeated Volvo 2-0 in the first round. The top two teams will gain promotion.

New Green, out of Manchester, and the St Ann-based Volvo got their first point after playing to a 0-0 draw at Drax Hall in the other game of the four-team play-off.

New Green ended the game with 10 players following the dismissal of Christopher Smith in the 75th minute.

"It was a good performance; however, I still believe we should have scored more goals because at the end of the day, we have to try to be more clinical in front of the goal," Cavalier's coach, David Laylor, stated.

"We won, and I give thanks for that, but we know that the job is not done as yet, and we will be working on it to see us through to the premiership," he added.

Cavalier have three consecutive home matches and will next face Volvo at Collie Smith Drive on the 30th, while Savannah will host New Green.

Savannah's coach, Audly Thomas, believes his team had an off-day and does not foresee a recurrence.

"We played flat in defense, flat in midfield, flat in attack, so it was a bad day for us," Thomas stated. "Today was our bad game. I don't think we will play a next game like this."

Cavalier dominated the game and deservedly took the lead when Savannah's custodian, Neil Williams, could only manage to parry a header from Richard Williams, allowing Reid to hammer home from close range.

The overdue second goal came after Jackson was beautifully played through by substitute Jermar Thomas, and despite being forced wide by his marker, was able to fire into the far corner.