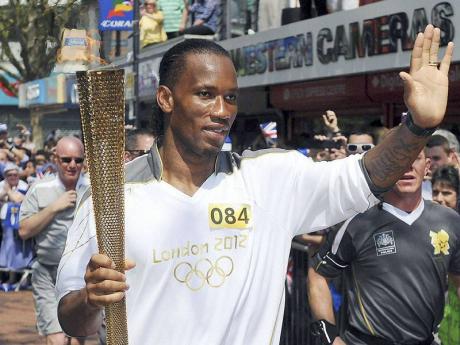 This photograph, made available by LOCOG, shows Didier Drogba carrying the Olympic Flame on the leg between Royal Wootton Bassett and Swindon, south-west England, yesterday. The Olympic torch relay is in its fifth day as it traverses Britain ahead of the July 27 opening of the London Games. - AP

Thousands cheering for Chelsea star Didier Drogba have mobbed the Olympic torch relay route in southwest England, hoping to get a glimpse of the Cte d'Ivoire striker as he carried the flame.

Many fans, some wearing Chelsea blue jerseys, cheered as their soccer (football) hero ran through the centre of Swindon yesterday. The 34-year-old waved as he trotted along with the torch.

Drogba announced on Tuesday that he was quitting Chelsea, just days after scoring the winning penalty shot in the club's dramatic Champion's League final win over Bayern Munich. He is pursuing a career elsewhere.

The British media have reported that Drogba's next move will take him to China, but he hasn't confirmed that.

"I hope everyone will understand," Drogba said. "Everything I did was for the fans, and I hope they understand."