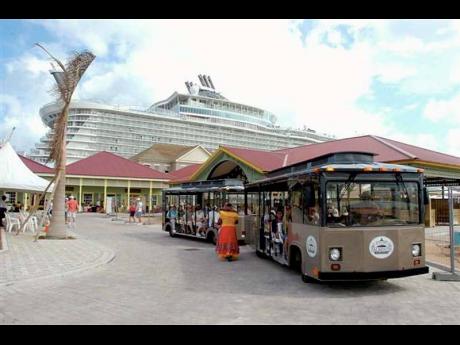 The one-year-old Falmouth Cruise Pier, seen here on its first day of doing business in March 2011, has been a game changer and is responsible for some cruise lines giving Jamaica a second look as a cruise destination. - File

The Port Authority of Jamaica (PAJ) is wooing Disney Cruise Line, arguing that it would raise the country's profile as a family vacation destination.

Disney executives were recently invited to Jamaica by the PAJ in an attempt to secure docking for its ships.

"We hope it translates to business," William Tatham, vice-president of cruise shipping and marina operations at the PAJ, said Tuesday. "The discussions are very encouraging."

Disney, which previously avoided docking in Jamaica, now appears interested based on the new Falmouth Pier and attractions.

"We brought in three executives and showed them Falmouth, Ocho Rios and Montego Bay," said Tatham. "We also highlighted the marquee attractions. The discussions were very encouraging. ... They were impressed by Falmouth and Jamaica."

The PAJ is on a campaign to woo major cruise lines. Disney is the second cruise line following the Norwegian Cruise Line to be given the pitch.

Cruise lines require up to two years to plan their itineraries but PAJ remains hopeful about Disney, one of the largest media conglomerates in the world, famous for its animation and theme parks.

"Our position is that we don't count our eggs before they are hatched, but we are encouraged," Tatham said. "Disney is positive in that it means that we are being endorsed by the Walt Disney company which places Jamaica as a family-friendly destination."

Jamaica now ranks as the fastest-growing cruise destination in the Caribbean based on the pull of the Falmouth Pier, launched a year ago.

Jamaica received its highest number of cruise visitors in four years at some 1.14 million passengers for 2011, or one-quarter more than 2010, according to PAJ data. Nearly half of those visitors docked at the Falmouth Pier with one-third at Ocho Rios and the balance at Montego Bay and Port Antonio.

The pier was developed by PAJ in partnership with Royal Caribbean Cruise Limited (RCCL), whose investments were estimated at US$167 million and US$102 million, respectively.

The new growth puts Jamaica, previously one of the worst performers in the region, above the formidable cruise destinations of St Maarten and Antigua & Barbuda which grew by double digits in 2011, based on travel data from Caribbean Tourism Organisation, which tracks regional cruise statistics.

The island's rise, however, comes at a period when 11 of the 24 territories recorded declines year-to-date, including Martinique down 69 per cent, Dominica down 39 per cent, St Vincent & the Grenadines down 24 per cent and Cayman Islands down 12.7 per cent.