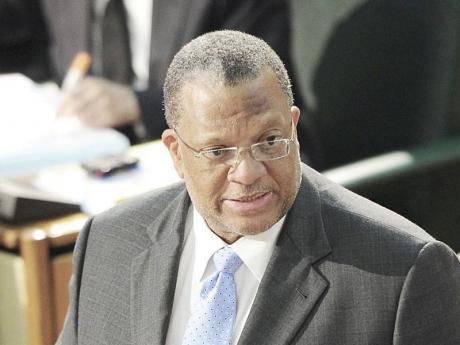 FINANCE MINISTER Dr Peter Phillips has asked Jamaicans to "make a covenant" with its Government as a precursor to growth and development.

Phillips made the appeal yesterday as he piled on $19.3 billion in new taxes, while at the same time asking for the country's "understanding and support" in what he describes as a "critical time".

"They read in the press where countries that are far more developed are falling into disorder and crisis. I am certain that none of them want Jamaica to sink," Phillips said.

To fund his $612-billion package, Phillips is to collect revenue - tax and non-tax - in the amount of $334.8 billion. He is also seeking to raise $251 billion in loans, and is projecting deficit spending of just over $19 billion.

The finance minister said that in addition to the $19.4-billion tax package, administrative and legislative programmes would be designed to raise an additional $6 billion.

Another $4 billion is to be taken from the National Housing Trust, $3 billion of which represents outstanding taxes owed to the Government. The remaining $1 billion is to be used to address infrastructure needs for specified housing schemes.

In the meantime, Phillips' tax package will see, among other things, a curtailing of discretionary waivers, modifying of the alcoholic regime for tourism, the introduction of a minimum income tax and an amendment to the corporate income tax structure.

The finance minister told Parliament that threshold for personal income tax would be increased from $441,168 to $507,312, effective January 1 next year. Gleaner calculations indicate this would amount to around $1,700 per month in benefit.

For corporate income tax, the rates applicable to unregulated companies will be reduced from 33.3 to 25 per cent.

Low rates not across board

The lowering of this rate will, however, not apply to regulated companies such as financial institutions, utility companies and telecommunications companies, which will continue to pay 33 per cent.

The Private Sector Working Group, which Phillips yesterday lauded for its raft of proposals on tax reform, had proposed the reduction in the corporate income tax rate from 33.3 to 15 per cent.

In the meantime, the minister also announced a widening of the GCT base, which will see items such as salt fish, corned beef, eggs, beef patties, rolled oats, animal feeds and pet food, flavoured milk, condensed milk and milk substitute being subject to GCT.

Phillips has also announced a 50 per cent increase in fees for motor-vehicle licence plates, fitness and registration.

The tax rate on winnings from betting, gambling, horse racing and lottery activities will also be increased from 15 to 20 per cent.

Phillips said he was mindful of sceptics who would argue that removing $23.4 billion from the economy was not consistent with a dynamic growth strategy.

He, however, said that if the debt was not reduced in the short run, the country would not be able to achieve its full growth potential.

According to the finance minister, the expenditure budget was built on restraint. Despite this, he said there was still a requirement for "incremental resources to finance the gap and limit the extent of borrowing".

"The measures that have been developed are designed to generate incremental resources and address some of the systemic weakness of the revenue system such as the declining base and leakage from the system," Phillips said.