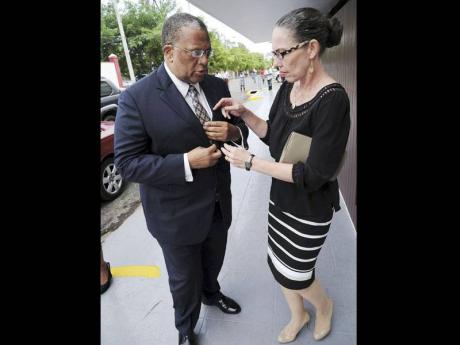 Finance Minister Dr Peter Phillips is assisted with his tie by his wife, Sandra, minutes before entering Parliament for his opening presentation in the 2012-2013 Budget Debate yesterday. - Norman Grindley/Chief Photographer

FINANCE AND Planning Minister Dr Peter Phillips says the country has made substantial progress towards a full re-engagement with the International Monetary Fund (IMF), signalling that the new agreement will extend over three years.

"Our relationship with the IMF stands at the centre of our economic recovery programme since our interest at this time is best served by entering into an agreement with the IMF," he said yesterday during his opening presentation in the Budget Debate.

Describing the IMF talks as "much more than a negotiation", Phillips said the dialogue, to date, was also aimed at crafting a macroeconomic programme that would balance the "urgent need to tackle our greatest vulnerability - that is the debt".

Commenting on the previous standby agreement with the IMF, Phillips said it was unfortunate that despite the funds that flowed from the multilateral financial institutions and the windfall from the Jamaica Debt Exchange, the country had not realised the anticipated gains to the full extent.

He said Jamaica did not adhere to commitments made under the standby agreement.

"As a result, external loan and grant financing for the financial year 2011-2012 was much lower than expected and, as a result, Jamaica must now take immediate steps to restore the trustworthiness of the country."

He said the Government was now moving to implement a credible programme of fiscal discipline in order to begin the process of rebuilding trust.