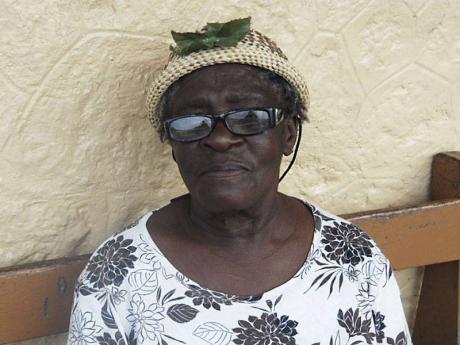 Dorothy Brown at the Linstead Hospital. - Photo by Karen Sudu

Residents of Linstead, St Catherine, and surrounding communities have indicated that a one per cent decrease in general consumption tax (GCT) - from 17.5 to 16.5 per cent - was not enough and would not impact their lives in any significant manner.

'One per cent!" exclaimed a woman who gave her name as Maxine, as she watched Finance Minister Dr Peter Phillips' opening presentation in the Budget Debate from the waiting room at the Linstead Hospital.

"It better it did stay at 17.5, one per cent can't mek a difference," she lamented. "Me disappointed."

A man in his 30s said he expected to hear an announcement signalling a reduction in GCT from 17.5 to 10 per cent.

"I was expecting a bigger drop in GCT, one per cent," he said with a laugh. "Four or five per cent would sound better. A joke thing that; that nah go make my life any better."

Phillips said the Government would retain exemption on items that protect the interests of the most vulnerable. However, he indicated that items such as salt fish and condensed milk, which were previously exempt from the tax, would now attract GCT.

"Food items nuh fi tax," interjected 76-year-old Dorothy Brown, of Redwood, who had taken her husband to the hospital for treatment.

Maxine agreed, adding that the average Jamaican finds it difficult to buy food for their family.

"Tax no fe go pan food item, it better it go pan something else," she said.

In the meantime, the finance minister said as of June 1, the Government would increase the threshold for GCT on electricity from 200 kilowatt-hours to 300 kilowatt-hours. Brown said she had expected to hear something else.

"I was hoping to hear that tax would come off light bill altogether. Even to say light bill a go drop. It still going be hard for me to pay light bill and me is a old lady," she told The Gleaner, though not indicating if she was currently paying tax on electricity.

Lorna, of Cheesefield, told The Gleaner she did not believe that any reduction in electricity costs would be long-standing.

"It can't last because every day fuel price go up. The Government just a try fe fool people," she said.