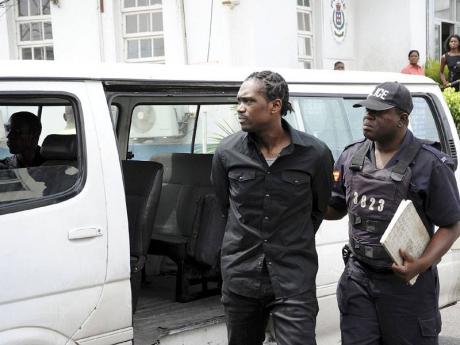 The attorney for Jamaican entertainer Busy Signal has warned that the United States authorities cannot resurrect drug-related charges against his client after he is extradited.

Attorney-at-law K.D. Knight, speaking after the entertainer yesterday waived his right to an extradition hearing, said this would constitute a breach of the Extradition Treaty between Jamaica and the US.

Deputy Director of Public Prosecutions Jeremy Palmer revealed in the Corporate Area Resident Magistrate's Court yesterday that Busy Signal was scheduled to go on trial for conspiracy to possess and distribute cocaine in the US State of Minnesota on October 10, 2002 when he absconded bail.

The entertainer, whose real name is Glendale Goshia Gordon, was arrested at the Norman Manley International Airport after he got off a flight from the United Kingdom.

But seeking to explain his client's move yesterday, Knight said the US authorities indicated, in the documents that supported the provisional warrant used to arrest him on Monday, that he was wanted only for absconding bail.

"He has consented to face absconding and absconding only ... not any drug-related charge," Knight insisted.

"In this scenario, he has received exactly that which he would have wanted had there been a fight ... that he be not surrendered in relation to the drug charge," he added.

The attorney, who is also a former Jamaican foreign affairs minister, said any move to reinstate the conspiracy charges would be a breach of the Extradition Treaty between the two countries that would trigger a "diplomatic furore".

The Office of the Director of Public Prosecutions (DPP), when contacted, backed up Knight's assertion, saying Gordon should only be tried for "failure to appear for trial" as is outlined in the extradition documents.

According to the DPP's office, this falls under what is commonly referred to as the Rule of Speciality which states that "the subject of an extradition can only be tried for the offence for which he was extradited".

"If it is that the US would want to try him for any other offence, they would have to expressly seek the leave of the Jamaican Government to do that," an official at the DPP's office explained.

"Otherwise, they would contravene the Rule of Speciality and the Law of Sovereignty between nations," the official added.

Hours after the hearing, the entertainer reportedly signed a waiver consent form, paving the way for a judge to issue the warrant authorising the extradition.

Late yesterday, Director of Public Prosecutions Paula Llewellyn revealed that her office was putting together all the documentation relating to the case to send to Justice Minister Mark Golding who is required to sign the warrant of surrender for Busy Signal.