A little piece of Jamaica in Moscow 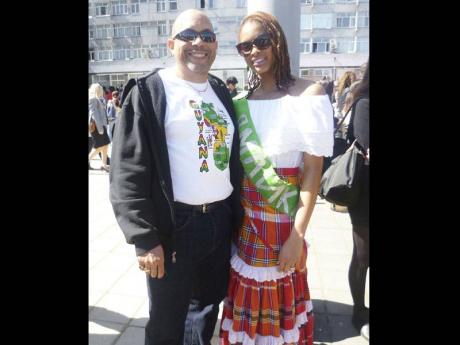 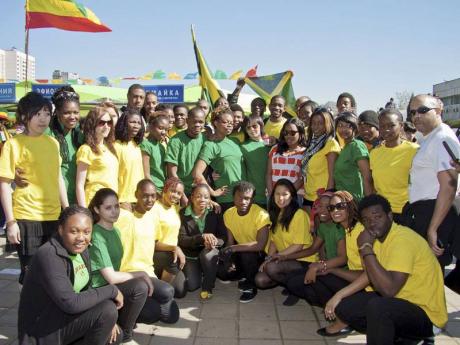 Members of the Jamaican team and their friends smile for the camera at International Day at People's Friendship University of Russia in Moscow, Russia, recently. - Contributed
1
2

Recently, Jamaican students enrolled at the People's Friendship University of Russia in Moscow, Russia, showcased the best of the island at the school's International Day.

The Gleaner contacted the group (about 31 students from various faculties including Agrarian, Medicine, and the Institute of Foreign Languages) via email. President of the students' group Mikael Lorne, and Thausha Martin, coordinator of the Jamaican presentation/secretary, replied on behalf of the group.

"It (International Day) is an annual event held by the university which hosts veterans, diplomats, special guests as well as the general school population," the email read. "It gives the student populace an opportunity to showcase and display different aspects of their culture through national cuisine, dance, dress, art and craft." International Day usually starts off with an exhibition followed by a concert.

The students feel Jamaica is an important destination for the outbound tourist business in Russia, citing a 2011 Moscow Times article 'Jamaica Longs for Russian Tourists'.

"Coupled with over 35 years of diplomatic relations between Jamaica and Russia, both of these facts signify the great hopes of building on a profitable past and creating a hopeful and bright future of relations," the group said. Apart from tourism, Jamaica's reggae music is world renowned and the group believes Russia presents itself as a potentially lucrative market for both Jamaica's tourism and music. Under the theme 'Jamaica 50: A nation on a mission', and in quoting Jamaica's ambassador to Germany, Joy Wheeler, "culture is an ideal bridge and a platform which one can use to strengthen bilateral relations and promote cooperation in all spheres". And the students used the island's rich culture to do their part.

"This year, in addition to the exhibition, the students also performed a flash mob, incorporating other nationalities including Russian, Asian, African, Latin American and Haitian - as the nation's motto states 'Out of Many, One People'," they explained. The group danced to music by some of Jamaica's most renowned artistes, such as Bob Marley, Damian 'Jr Gong' Marley, Konshens, and Richie Stephens. They felt one song from Stephens, particularly Big up Jamaica, with lines "big big storm from a little island, everywhere that we go we a champion", really epitomised their feelings towards Jamaica 50.

"We have come a far way in creating and embedding a unique, well-respected and admired culture and though we, like many other countries, struggle with the day-to-day challenges, we have a lot to be thankful for and proud of," the group noted.

The students solicited the support of the Moscow Times, which covered the event, and also received assistance from the university's photography and film team. The team also received financial support from a Russia-based consulting company, Alinga Consulting Group.

They explained that the general feeling towards Jamaica was quite positive, even though many are familiar with the country only by name. But they revealed that the Russians had created a song regarding Jamaica's 1998 World Cup match against Argentina, which was quite popular throughout Russia.

"For the most part, the Jamaican students here have taken the opportunity to introduce Jamaican culture, and to educate on our geography," the email said, noting that group members use personal contact with the everyday people to spread the word of the island.

The group said they were aware of the economic challenges facing Jamaica, but were looking to take their talents back home.

"We are fully supportive of our country and look forward to the re-energising of our local economy and hence, the creation of adequate opportunities." They said that living in Russia has enhanced their abilities in areas such as conceptual thinking, strategic thinking and perseverance.

"We strongly believe that these will play as great assets in becoming future entrepreneurs in Jamaica and, with the support of our country, build a better, stronger economy and reinforce national pride."