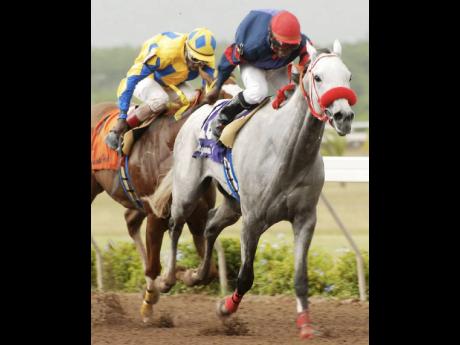 OUR CREATION, running odds of at 17-1 with Paul Francis aboard, leads home long-time leader I'VE BEEN CHOSEN (Shane Ellis) in the fourth race for three-year-olds over 1600 metres at Caymanas Park on Wednesday. The grey gelding was one of two winners for trainer Michael McIntosh on the card. - Colin Hamilton/Freelance Photographer

With CHIEF OF STAFF at 33-1 and OUR CREATION at 17-1 providing the upsets on Wednesday at Caymanas Park, tomorrow's Pick-9 should get an additional boost.

Although the grey OUR CREATION derailed some players in both Super-6s, they were caught by astute punters, the first paying $94,000 and the second a whopping $223,000. There is also a $300,000 carryover in the Hit-6 on the ninth and final race.

The Pick-9 will embrace all nine races, the first Super-6 from two to seven, the overlapping Super-6 from race four to nine. We look at the second Super-6, which gets under way with the Drumbeat Trophy feature for $180,000 claimers over the straight-five course.

The race has attracted 10 starters including top contenders REDS THOMAS, FIRST EDITION and SKIPPING MICHELLE, all winners over the straight course in recent months.

The Welsh Soutar-trained SKIPPING MICHELLE scored a huge 99-1 upset over the distance on May 9, beating MR FABULOUS by 31/4 lengths in the fairly good time of 1:00.1. She returns on the convenient mark of 51.0kg by virtue of apprentice Michael Grant's 3.0kg claim and must be a dangerous opponent under these conditions.

ST BERNARD, who beat all barring ARGENTA over the straight on May 16, has been knocking at the door for some time and it should finally open in the fifth race over the round-five course for maiden three-year-olds, with leading jockey Dane Nelson now replacing Richard Mairs.

It's a race with endless possi-bilities in which the likelihood of an upset is real. Significantly, the five top jockeys (Nelson, Ellis, champion Dick Cardenas, Omar Walker and Paul Francis) have live mounts in this race and the conventional wisdom is that one of them will win. However, I'm going outside of the box and take the down-in-class PRINCE OF ARABIA to win at good odds.

Briefly, the sparingly raced GALACTUS (Nelson up), who was caught on the line by GREEN BERET on April 28 after a 16-month absence, represents a banker in the seventh race, while his unbeaten stable companion, the DaCosta-trained American 3-y-o filly HUPOMONE, should lead home fellow American RICHIESHAPPYNOTION in the eighth over 1200 metres for overnight allowance horses. The closing restricted allowance race over 1400 metres should resolve itself into a straight fight between ORDEROFDISTINCTION and consistent ANNTRACK.