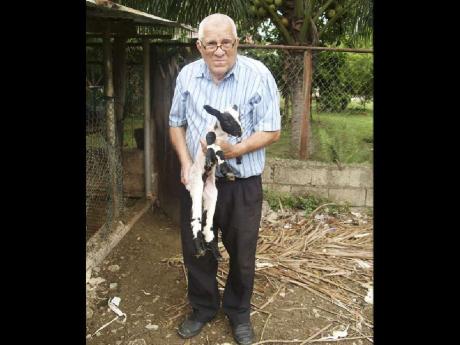 CECIL RODGERS took The Gleaner to see his herd of 20 sheep. Upon entry to the sheep pen, he stopped to check on a ewe that had recently given birth. The remainder of the herd was some distance away grazing. He got a bucket with some mangoes, stood in the middle of the pasture, called the sheep, and except for a few shy ones, they came to him.

The varieties include Suffock and Barbados Black Belly, both of which are self-searing as opposed to the traditional wool-encrusted ones.

Rogers is soft-spoken and gentle and seems to have a natural affinity for the animals. He said rearing sheep is now his hobby, and although he loves cats and birds, he is particularly fond of sheep. His love for sheep started as a child in a family that reared the animals for more than 60 years. He has reared them on his own for more than 40 years.

The other factor that influenced Roger's decision to rear sheep is their manageability. "They are easy to manage. You don't have to have any special fence. Three bars of wire is enough, unlike goats, where you have to have special mesh fence," Rogers explained.

Additionally, they do not require any special regimen or feed. He puts his herd out to pasture and ensures that they have access to water, and he said that extra help is not a requirement, except when they are being medicated.

Rogers told The Gleaner that sheep farming is not a new concept to the area and that in former times, surrounding areas such as Fullerswood, Honslow, and Black River were known for sheep rearing. In its heyday, sheep rearing supplied meat demands and facilitated the export market for wool, where the Hendricks Wharf was a distribution hub.

He also remembers that there was a high demand for sheep refuse. "Those days, people didn't have fertilisers. They used to collect the dung from donkeys, which saved a lot of money."

He also recollects the lambing season, which used to be an event where the lambs' tails had to be cut. This process, he said, has become easier as the tails are now clamped, which minimises the bleeding and discomfort for the lambs.

Over the years, Rogers has noticed an unfounded stigma surrounding the consumption of sheep in Jamaica. The farming fraternity has tried to dispel this stigma by encouraging the consumption of mutton from sheep. He emphasised that sheep mutton is high in quality and the best way to prepare it is by barbecuing or roasting, although he prefers barbecue. He said the meat is tender and it is regularly used in his home. He is also of the view that more persons should get into the business because even though it is not very popular, there is a steady demand from breeders and some meat buyers.

Rogers belives that although slow, resurgence in sheep production is possible as more persons are getting involved.