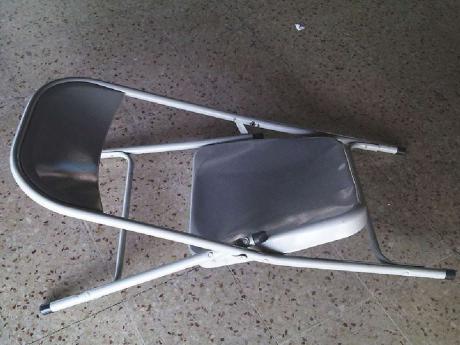 One of the broken-down chairs at Summit Police Station. - Contributed

What I also observed while there is that persons go to the police station from as early as midnight just to be at the front of the line, even though the procedure doesn't start until about 9 a.m.

Now with an average of 90-100 persons having their fingerprints taken, especially from so early in the morning, one would assume that there would be adequate chairs put in place for persons to sit. Also, with pregnant women, women with babies, senior citizens, persons with foot and back injuries also there to get their fingerprints taken, it's essential for proper chairs to be there to accommodate persons.

However, to my surprise, only three broken-down chairs were available, one of which a man tried sitting on and he actually fell to the ground.

There was a returning resident present the day I went, a lady who looked like she was in her late 60s or 70s, who said she currently lives in Falmouth and came to Montego Bay to get a police certificate because she was chosen to become a justice of the peace. Living in New Jersey as a teacher for several years, she didn't know the procedures. She was told when an officer came out, minutes to 9, that she needed two passport-size photographs. She was in line, number 60 to be exact, and she told us she was going to get the photographs and return.

When she returned, they were serving the sixth or seventh person. With No. 60, she was far from being served. Upon her return, the officer giving out the numbers told her that she (the officer) won't give her (the senior citizen) any numbers or forms to get her fingerprint processed because she went downtown to get her picture taken. The officer addressed her in a very disrespectful manner.

Another issue we had at the station the first day I went was that there wasn't any water at the police station. All day, the bathrooms were out of use.

I remember asking her for her name about 10 times and she refused to disclose her identity. I told her she was a public-sector worker and that it was wrong for her to deny telling me her name.

Needless to say, I, along with several others, didn't get through that day so I had to go back the following day. I got there this time about 3:30 a.m. When I reached, I was the 11th person there. One man was there from 10:30 p.m. the previous day.

Persons there shared with me that the same woman had been disrespectful to them the day or week before.

On this day, a different officer dealt with us, and her conduct was so professional, it was like a breath of fresh air. The line also moved faster.