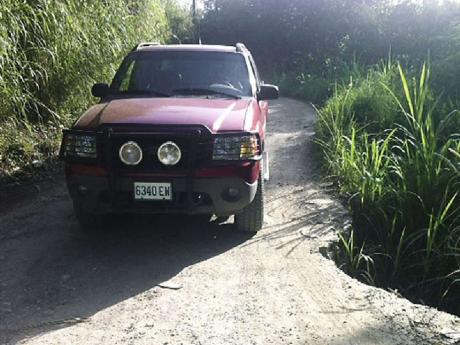 On Sunday, May 13, 2012, at 6 p.m., a meeting had been arranged between the East Rural St Andrew Member of Parliament Damion Crawford and residents of Content and Quashie Gap. However, the meeting did not materialise and the numerous people who turned out were all very disappointed.

With the grave conditions of the road, numerous breakaways and lack of water, the residents are hard-pressed to make a living. Two Thursdays ago, a vehicle went over a breakaway and luckily did not fall to the bottom of the precipice. The good residents were able to pull the car out.

This was the second such incident in less than a year. However, on the first occurrence, the vehicle was totalled and the occupants sustained injuries.

This area has a children's home with more than 60 residents, Chesterfield police training facilities, a school and community centre. It is a farming community, and the road links Portland to St Andrew when the Newcastle main road is blocked.

The farmers have great difficulty getting their produce to market as the buses have stopped operating on the route and the children are also experiencing difficulty in getting to schools in Kingston.

The residents of the area have, over the years, put together funds and donated their labour to do some repairs, but conditions are so dire that the people can no longer afford it. It has been 24 years since any work was done on our roads. The tropical storms are around the corner, and one more bout of heavy rain and thousands of residents will be cut off.

MP Damion Crawford can, and must, do better!