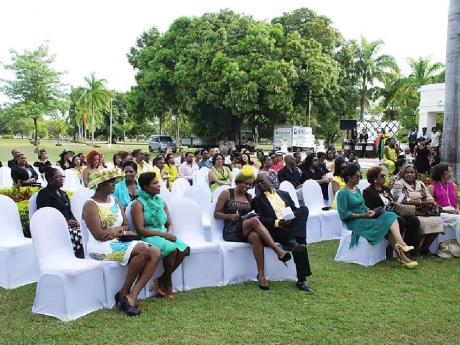 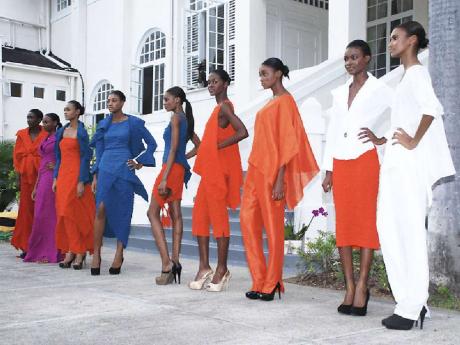 StyleWeek Jamaica 2012 officially began on Thursday but did so with a difference. The inaugural event of StyleWeek took place on the lush lawns of King's House. Aptly titled High Tea 'N' Style with The First Lady, the style meets charity event was greatly supported. The event was hosted by Emily Crooks and was under the patronage of Lady Allen.

The dress code on the invitations read: celebrating Jamaica (Black, Gold and Green). Many of the females who turned out to the event were dressed to impress, donning hats and fascinators that looked regal.

High Tea 'N' Style, a charity event, seeks to elevate the profile and reinforce the ambitions of two charities for which all proceeds will go.

The charities are the The I Believe Foundation and the Save Our Boys Foundation.

In her address, Lady Allen welcomed all in attendance to King's House.

"This is your house, the people's house," she said.

She also commended Saint International CEO Deiwght Peters on his contribution to Jamaica 50 by putting on an event in aid of charities.

Peters also stated that hosting the event at King's House was quite fitting. He noted that "the lawns of King's House represent the convergence of high style and charity".

In true StyleWeek fashion, designers Neah Lis and Courtney Washington also showcased pieces from their collection at the event.

At the end of the fashion show, guests were treated to tea and a wide array of finger food and pastries.

Washington, who was born in Jamaica and later in lived in the Unites States and Ghana, said that the pieces he chose for his High Tea 'N' Style collection were conservative.

"The collection that I showed today is a little bit more contemporary. It is completely wearable for all ages and all sizes because we specialise in sizes. The event went well. I will also be displaying my collection on Saturday [today] at Port Royal, and also on Sunday when we block Knutsford Boulevard. That's gonna be the major collection," he told The Gleaner.

Local designer Neah Lis' collection was also a hit with the audience.

"Basically, it's all about flirtatious for me and for the average shapely woman. My collection is focused on Caribbean. These pieces were just based on a high tea fashion event like this, where I know we would be seeing different types of people in our community," she told The Gleaner.

Neah Lis went on to say that her collection of StyleWeek will be dedicated to her father-in-law who recently passed.

Lady Allen said when she was approached to be part of the event, she jumped at the opportunity.

"I thought this was a nice occasion to have tea and fashion, and especially that it was for charity. The I Believe Initiative has wanted to have a conference for young people, but we have been challenged financially. Then Mrs (Juliet) Holness had asked me some time before to assist her with the Save The Boys project, so when Peters approached us it was a no-brainer, I was like 'yes, yes, yes'. What better place to have high tea and fashion than at King's House? This is the people's house, so you want the people to come in from time to time and enjoy their house," Lady Allen told The Gleaner.

"I am stunned. It's absolutely exquisite. The seating, the colours against the lush landscape, the backdrop of King's House is absolutely remarkable. This is what fashion in Jamaica should be about. This backdrop is international and ideal in terms of aesthetics, and this is what StyleWeek aims to achieve in terms of using the best of Jamaica through fashion," Peters said.