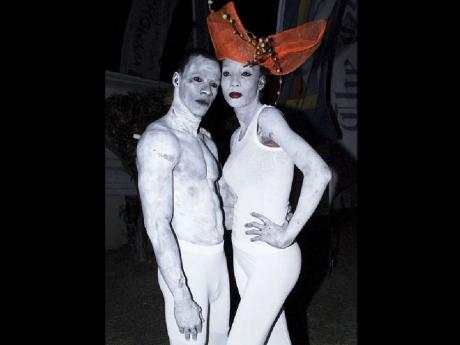 Two models pose alongside each other at CityStyle. The female wears headgear from one of the displayed accessory lines. - Photo by Colin Hamilton

Most adhered to the all-white dress code and came out in such to view the collections from designers such as Leila Edwards, Kameela Abdul-Maajid, Janice Forrester, Shenna Campbell, Karl Brown and Kimone Young.

It seemed to be a case of being 'fashionably late', as the event's advertised 10:30 p.m. showtime time did not materialise until 11:08 p.m. - just as a slight drizzle began and abruptly ended.

In comparison to last year's event, an improved decor was noticed throughout the venue. The event however, dwindled in crowd support.

On the night when
cool sea breezes caused the white cloth decor to dance gracefully
against the backdrop of the night sky, the accessories collection for
StyleWeek 2012, showcasing the trends for 2013 was delivered to
patrons.

Models walked the runway before going on to
stand on pedestals displaying the varying accessories they were adorned
with.

The displays were rounded off with a collection
by Jamaica-born designer from New York, Kimone
Young.

Several high-profile figures came out to help
with the 'painting' as fashion model/actor Tyson Beckford, state
minister in the Ministry of Tourism and Entertainment, Damion Crawford,
Miss Jamaica Universe 2012 Chantal Zacky, and Better Mus' Come director
Storm Saulter were among those who ventured
downtown.

Before the event's start, patrons enjoyed
food and beverages while jamming to mainly house music from DJ Kurt
Riley.

With this staging of the event, downtown
Kingston's stylish renaissance continues along with the vision, as Saint
International CEO Deiwght Peters puts it, "for the world to see what
downtown Kingston can become and will (become)". Saint International is
the owner and organisation of StyleWeek Jamaica, a group of events.
CityStyle is the second of the major StyleWeek
events.