'Sins of the Father' examines the unspeakable 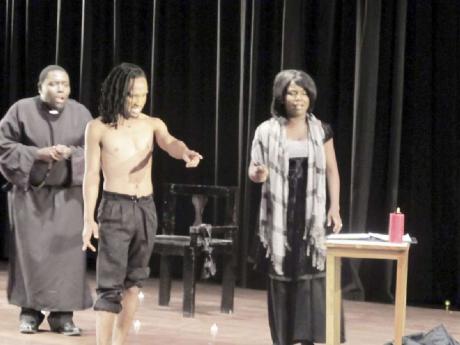 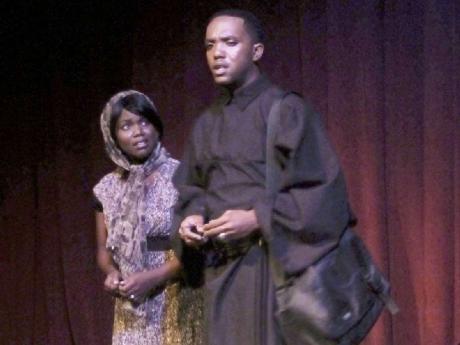 Margaret Livingston (played by Shanique Williams) and Father Peter (played by Jason Williams) speak during a scene from 'Sins of the Father'. - Photo by Marcia Rowe
1
2

Throughout the history of western theatre, playwrights have used Christianity as the subject of their works and, of the number of denominations in this religious sector, the Catholic Church seemed to be a favourite choice.

Among the familiar works that have put the spotlight on Catholicism are Moliere's Tartuffe, John Pielmeier's Agnes of God, and Bertolt Brecht's Galileo. But no Jamaican playwright has travelled the path quite the way Joel Miller's Sins of the Father has.

Perhaps Miller's bold step is on the basis that, if theatre is to correct the vices of man, then there should be no privileged group, class, or sector.

At the end of the production and stated at the back the programme, Miller's play is also a tribute to his grandmother, Valarie Francis-McCarthy.

Regardless of his reason for putting pen to paper, the playwright's attempt is refreshingly different and provides an avenue for meaningful discussion.

The strength, however, of the production, as seen last Friday, was the fine and controlled acting from the cast.

The play follows a somewhat loosely structured plot, guided by strong languages, laced with both religious and scientific terminology.

Behind the white cyclorama of the Philip Sherlock Centre for the Creative Arts were images of about four people. And from the monologue, it was clear that the actions, serenaded by slow Catholic music, were being conducted in a hospital theatre.

In the following scenes, the story of Dr James Livingston (Joel Miller) and his wife, Margaret (Shanique Williams), continues to unfold.

Both are the parents of a daughter or daughters. However, a daughter has died, and so James condemns the church, while holding firmly to scientific beliefs.

Margaret, on the other hand, as a result of the same incident, is drawn more to her religion. She is a Catholic by faith. She, out of frustration with her husband's stance, seeks help from her priest, Father Peter (Jason Williams). This takes the plot into another direction.

Father Peter, who believes and practices exorcism - against the directives of the Pope (Jerren Chamber) - invites James to see one of his patients, Halley (Shantol Jackson).

The Father's invitation led to a number of mystical events, including James' body becoming the host for a Spanish-speaking spirit.

The story ends with what appeared to be the church's silencing of all who had witnessed James' dilemma.

In spite of its serious nature, there were some humorous lines.

The theme of secrecy in the church was not lost, and Miller is bold for such an undertaking. But he may want to review the length of the scenes. They were too short and seemed more appropriate for the screen than the stage. And the long pauses between each scene change were not helpful.

Another area of weakness in the production was the inconsistency between the status of the Livingstons and the set used to establish their home. While the non-realistic style is understood, the table or its cover did not represent wealth.

On the other hand, the acting was fantastic. There was fine, controlled characterisation from the entire cast, which also included Romaine Duncan (Father Thomas).

Special mention must be given to Williams and Jackson.

Williams created a believable Margaret, while Jackson captured the gothic look and actions and movement of the possessed Halley well.

On a whole, the production is watchable, but it should be noted that all may not be pleased by what they see. It is not recommended for children.

'Sins of the Father' examines the unspeakable.