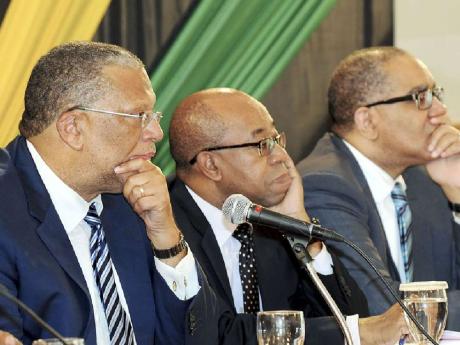 The decision to lower the rate of the general consumption tax (GCT) while widening the base of items that will now be taxed and the proposed reduction in the corporate income-tax rate are among several measures that found favour with the leadership of the Jamaica Exporters' Association, the Jamaica Manufacturers' Association (JMA) and the Jamaica Chamber of Commerce (JCC).

JMA Deputy President Metry Seaga, speaking at a Gleaner Editors' Forum held at the newspaper's central Kingston offices yesterday, argued that the move in relation to the GCT could be Phillips' way of telling the country that the GCT rate would be further reduced and more items removed from the exempt list.

"So for me, the minister has turned in the right direction and probably even taken a step in that direction," he added.

JMA President Brian Pengelley agreed, saying the process would not "be an overnight deal".

"I think we all understand that. So we are encouraged that the minister has taken some steps and we are looking forward to see how fast we can move from here," Pengelley said.

JCC President Milton Samuda said he was encouraged to see that the finance minister had stuck to his promise of fiscal prudence.

"You continue to see a concerted effort to cover the gap and some steps towards a comprehensive rather than piecemeal reform of the tax process," Samuda argued.

He added: "Are there things that we would have liked done?

Obviously and you will see them in the PSWG (Private Sector Working Group) proposal, but I think you will find that people at least feel listened to and that the submission was taken seriously."

The PSWG, in its tax-reform proposal that
was presented to a special committee of Parliament, had called for the
removal of GCT exemption from several items, including basic foods, and a
lowering of the GCT rate from 17.5 to 12.5 per
cent.

The group had also suggested that corporate
income tax be cut from 33.3 to 25 per cent.

Tax expert Allison Peart argued
that between the expectations of the most vulnerable groups in the
society and the multilateral organisations Phillips had to perform "a
balancing act".

"He really had to do something. The
Budget was delayed and the IMF (International Monetary Fund) is watching
very carefully, so he had a balancing act," she
reasoned.