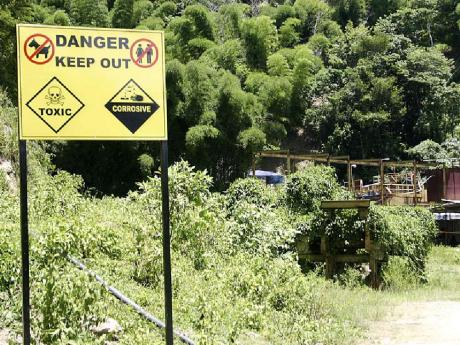 MORE THAN 10 months after the death of a cow at a gold mine in Kraal, Clarendon, was linked to its ingestion of cyanide-tainted water, state agencies are still grappling with the removal and storage of more than eight tonnes of the highly toxic material from that site. Their efforts have been stalled by a lack of funding to do the necessary rehabilitation of the roadway to facilitate passage of heavy-duty vehicles to transport the 20-foot container in which the cyanide is stored.

Meanwhile, following neutralisation of the cyanide-polluted water the National Environment and Planning Agency, which is spearheading the multi-agency collaboration, is yet to identify an appropriate site to relocate or dispose of the eight to 10 tonnes of sodium cyanide which is in powder form. It is, in fact, looking beyond the shores of Jamaica for a solution, even as it engages the services of the Office of Disaster Preparedness and Emergency Management (ODPEM).

Richard Thompson, deputy director general of the ODPEM, told The Gleaner this week that in addition to clearing debris from some sections of the roadway, there is need for widening and repairing other sections to withstand the heavy-duty trucks which will be needed to get the cyanide out. "We are unable to access the mine as it is now," he admitted.