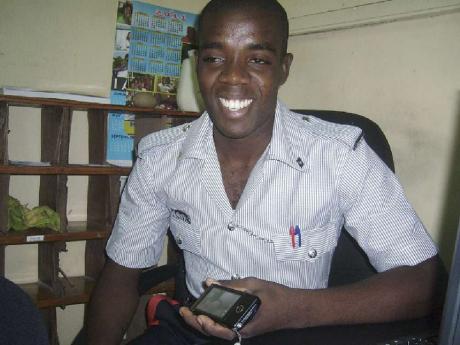 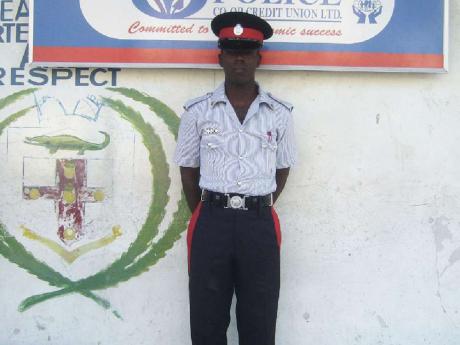 Constable Raymond Johnson just before he goes to his first court duty on Tuesday, May 7.
1
2

RAYMOND JOHNSON'S dream of becoming a teacher didn't materialise because of certain challenges. So, after graduating from St Mary High School in 2007, he joined the National Youth Service (NYS), and worked at various jobs. Yet the challenges continued, and with a burning desire to better his circumstances, he decided to join the police force.

That decision might have been motivated also by his association with the police with whom he worked at the Port Maria Traffic Department during his sojourn with the National Youth Service. He applied to the force, got called, and started training in November last year. After a gruelling five months of classroom work and physical training, he graduated on April 27 from the Jamaica Police Academy in Twickenham Park, St Catherine, as part of the 100th batch.

But Constable Johnson is no ordinary graduate of the academy. From among the 197 constables who were passed out, he, and another graduate of St Mary High School, Shimron Walker, got the highest marks, with Johnson getting as much as 28 out of 30 in one module, and 51 out of 60 in another. They were duly recognised on graduation day.

Johnson said there was nothing pretty about the training and the trainees couldn't wait for it to end. There was stiff competition among the squads, and it was all about being macho. "The field call aspect was the most significant part of the training because that taught you how to survive as a police in the real world," he told The Gleaner during an interview at the Port Maria Police Station, where the real policing has started for him. He was getting ready for his first court duty when The Gleaner happened to be in the area.

Johnson sees his graduating at the top of the class as "something that can propel me forward". He said it has given him a sense of achievement, as when he entered training, he had three objectives: to have a knowledge of the job; to graduate; and to get an award, not just an award, but the top award. He said he studied hard, even though he's not the book type. He's more of a practical learner. But, he wanted to make his mother proud.

Now that she is indeed proud, and he has achieved his objectives so far, he said he wants to be the policeman who models "the JCF as it is supposed to be, and one who people look forward to (for) good customer service". Customer-service delivery was part of his training at police school and at the NYS. He worked at Couples in Ocho Rios as an NYS intern.

Since his graduation, he has gained "lots of respect", he said, but he has been warned by loved ones. "Raymond, we know who you are, don't let anyone spoil you," they cautioned him. And Constable Johnson seems to know who he is and what he wants for himself. "When I have my family, I want to set a good foundation for them, so I am not living for myself," he said, "(I want) to be someone in society."

It has always been a struggle for the young man from Bailey's Vale, St Mary, but he has good friends and encouraging family members. He mentioned an uncle who would tell him stories of his struggles, but he would find the storytelling frustrating. "Sometimes, I really wanted not to hear these stories ... but at the end of the day, I got the understanding of what he was really saying ... . He was telling me the stories so that I could better myself," Johnson said in retrospect.

His father, who "did his best" and "was a good man", was there for him. "Ray, stay focus, do yuh schoolwork. Things and times hard, but you can make it," he would say. However, he died last year, and, as such, didn't get to wallow in Constable Johnson's best achievement of his life so far.

It "puts me somewhere in society where I can say I am not there yet, but I am getting there," said the constable who studied building construction, technical drawing, visual arts, integrated science, geography, maths, English, and information technology in high school. Law and computer analysis are two areas he would also like to pursue. Time will tell.