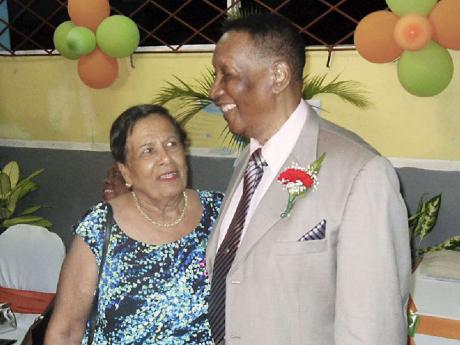 Former parliamentarian Enid Bennett, who was instrumental in securing the land on which the Bog Walk High School is built, congratulates Sebert Hunter who served the school board from 1971 to 2011. 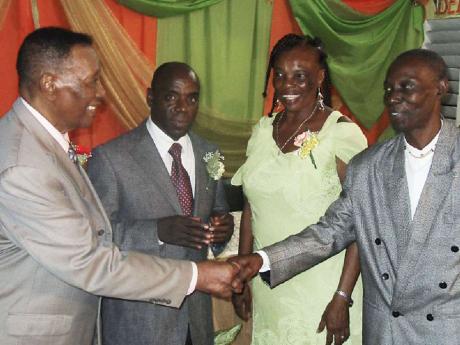 FOUR STALWARTS who gave a combined 132 years' service to Bog Walk High School in St Catherine were awarded for their invaluable contributions at an appreciation ceremony themed 'Celebrating a Past Built on Dedicated and Judicious Service', held recently at the school.

Sebert Hunter, who worked at United Estates, now Trade Winds Citrus Limited, in Bog Walk as an accountant for more than 30 years was lauded for his 40 years of service to the school board.

Hunter, who hails from Lloyd's Valley in St Thomas, served as school board chairman from 1975 until last December when he retired. He was recognised as a compassionate humanitarian and an enthusiastic ambassador.

"You have been an integral part of our growth and success. We have benefited a great deal from your resourcefulness, your creativity and entrepreneurial spirit, too," read Shelley Whitby from the citation to Hunter.

Manning-Edwards, a daughter of Kingston, was described as a multifaceted educator. She joined the staff in January 1976. Among her duties, she taught mathematics and served as the school's librarian.

"Your mathematical and linguistic genius has nourished countless students who lapped from your stream of knowledge. A douse of library science was surely nothing new," Cecil Donald, teacher, cited.

Prior to her stint at Bog Walk High, Manning-Edwards, who specialised in physics at Mico Teachers' College, taught at Top Jackson and Mount Fletcher All-Age School as well as Grateful Hill Primary School.

Green-Vassell, a trained nurse, hails from Bleauwearie, Westmoreland, worked at the Bustamante Hospital for Children, St Joseph's Hospital, and the Linstead Health Centre.

"Not only have you been mentor, guidance counsellor, nurse, friend, companion, and parent, but you considered teaching as not merely a livelihood, but also a medium to guide your students towards success in all respects," Dawn Clarke, teacher, noted as she read Green-Vassell's citation.

Green-Vassell received training from institutions including the United Theological College and the National Academy of Nursing as well as the University of Technology. She served Bog Walk High School for 21 years teaching social studies, history, and religious education.

Williams, who has her roots planted in Darliston, Westmoreland, holds a Bachelor of Education in Business and Computer Studies and a Master of Arts in teaching. She was described as a consummate educator and administrator for her service, which spanned September 1975 to December 2011.

Williams served as Caribbean Examinations Council coordinator and guidance counsellor. In January 1995, she took on the role of work-experience coordinator, a post she held until her retirement in December last year.

"Your sterling contribution, wealth of experience, and knowledge are to be emulated by other teachers, especially those just entering the teaching profession. You are a very meticulous planner and organiser who won the love, admiration, and respect of all the members of the school," Simon Sylvester highlighted during his reading of Williams' citation.

President of the Jamaica Teachers' Association, Paul Adams, who delivered the keynote address in an inimitable manner, lauded the honourees for their unstinting service.

"Every single person must make the type of contribution that befits your conviction, your talent, and your potential," he said.

He called on the Government to increase the budgetary allocation made to the education ministry, following the tabling of the 2012-2013 Estimates of Expenditure in the House of Representatives.

He used the occasion to denounce same-sex marriage.