Doctor's Advice - Should she go on the Pill? 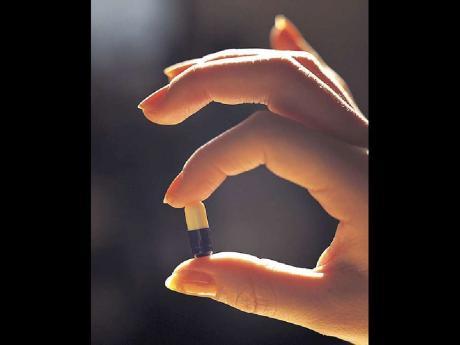 Q. I am 19, and thinking of going on the Pill. But my friend says that I cannot do so because I smoke. Is this true, Doctor?

A. Not quite. At your age, the risks of the Pill are very low. I am talking about the risks of heart attacks and of thrombosis in the veins.

Unfortunately, these dangers are considerably increased if you smoke. You may well find a doctor who would be willing to prescribe the Pill for you, but I am sure he will say that the safest thing for you to do when you go on the Pill is to give up smoking altogether.

Q. Good day, Doc. I used condoms for the first time with my girlfriend last week. But an hour or so after each sex act, I found that my organ had become very sore and 'angry.' There was also some itching, plus a few little bumps on the skin. Each time, the symptoms went away in around two hours. Why did this problem happen?

A. You are one of the substantial minority of people who are allergic to latex, or just possibly to chemicals which have been added to the latex in the condom- manufacturing process. So in future, you should use only low-allergy condoms. If these aren't sold in any shops near you, then just tap the words 'low allergy condom' into Google. You will then find, literally, hundreds of firms which are keen to sell you these products.

Q. Although I lost my virginity two years ago, I think that I still have little 'bits' of my hymen remaining. They seem to pain me whenever I have sex. Is this possible?

A. Very possible. When the hymen (or 'virgin's veil') is broken at first intercourse, there are often little hymeneal tags left in the vagina. They form a little ring of pink blobs just inside the opening of the vagina. Medically, these go by the rather cumbersome name of 'carunculae myrtiformes.'

Quite frequently, they are a bit tender, and so they may cause discomfort during intercourse. I am sure that is what has happened with you. Initially, what you should do is just get yourself a good sex lubricant, and use a lot of it, both before and during sex. If that doesn't work, you should see a 'gynae,' who will probably be willing to do a little operation to remove these tags.

Q. I have rather coarse, thick hairs which grow on the underside of my penis. My fiancée says that these irritate her when we make love. Is she right? And what can I do about it?

A. I have seen one or two cases in which guys had such tough, prickly penile hair that it caused discomfort, or even pain, for their sex partners. So I think you should definitely get rid of this hair. The first thing you could do is to shave it off, being very careful, of course! That should cure the problem. However, the hair will, of course, re-grow eventually. So you might want to have it permanently removed by electrolysis or laser. If so, please make sure that you go to an operator who really knows what he is doing.

Q. Doctor, I am still a virgin, although I propose to change that next year, but at the moment, can I use tampons? My mother says it is impossible.

A. Nearly all virgins can use tampons. This is because there is a hole in the hymen. Please bear in mind that the tampons may well break your hymen. In that case, you would no longer have the appearance of virginity. But these days, many girls are not concerned about that.

Q. I am 18, and a doctor says I should have a circumcision operation because my foreskin is too tight. But I am reluctant to do this. Doc, is there any way of dealing with this problem, other than having the operation?

A. I'm not sure how much of a problem your tight foreskin is. There are two main indications for circumcision:

If either of these two things applies to you, then I think you should go ahead and have the operation. However, if the tightness isn't too bad, then it is sometimes possible to avoid surgery. This can be done in one of two ways:

So don't rush into having the operation. You can get further information from www.nocirc.org.

Q My boyfriend is frequently away from the island, and we both get very lonely. He wants me to go in for what he calls 'phone sex' with him while he is abroad. I don't really understand what it is. Is this kind of thing abnormal? And is it illegal?

Although phone sex certainly isn't everybody's choice, I would not describe it as abnormal. And it certainly isn't illegal. Finally, there are two positive aspects to it. First, it can't give you any sexual infections. And second, it can't get you pregnant.

Q. I had a date with a girl in Falmouth three weeks go, and she gave me a 'hand job,' Doctor. Now she is saying that she is pregnant by me, but we did NOT have intercourse at any time!

A. If you did not have sexual intercourse with her, it is almost impossible that she is pregnant by you, unless she somehow managed to insert your seminal fluid into her vagina. So I think you should resist this claim.

Q. I must have been crazy to do this, but last month, I had sex with three different guys on different nights.Now I find that I am pregnant, Doc. How can I discover who the father is?

A I am afraid that there is really no way in which you can find out until after the child is born. At that stage, you can have the baby DNA-tested, and also try to persuade the three boys to take DNA tests, too. The only other thing I can suggest is this. If you know the date on which you ovulated, that might give you some clue as to who the father is.

Q. I am 19 and a virgin. Should I have a Pap smear test before I start having sex?

A No. There is no point in having a Pap smear test while you are still a virgin.