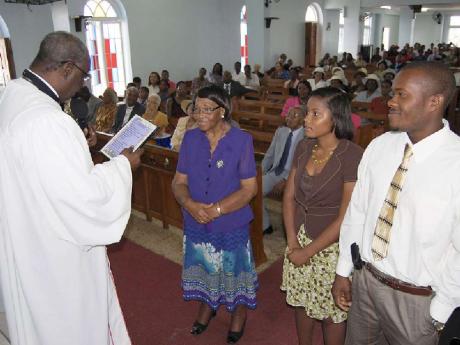 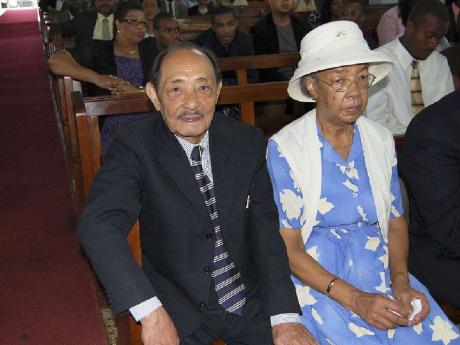 Philip and Terris Leung disclosed that obeying their marriage vows is the secret behind their marriage lasting as long as 56 years. - Photo by Dave Lindo 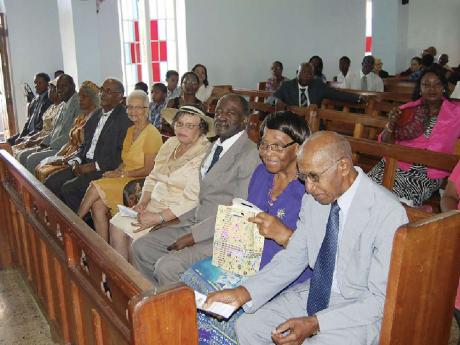 Seated in the front bench are members of the Ridgemount United Church whose marriages have lasted for 50 years and over.
1
2
3

WITH MANY couples falling in and out of love in a jiffy, marriages seem not to last as long as they used to in earlier days. Despite this recent trend, 15 elderly couples from Mandeville are leading by example, showing that these unions can last, as they celebrate more than 50 years of marriage.

Led by the Reverend Oliver Daley, the Ridgemount United Church in Mandeville last Sunday honoured the 15 couples, who were treated with the utmost respect and admiration by the congregation.

Even though they have been married for so many years, the couples' love and commitment to each other appeared as if it were only yesterday that they had exchanged their wedding vows.

From among the 15 couples, Rupert and Cecilyn Nelson were celebrating the longest period of marriage - 58 years. Rupert wasn't able to make it to the service, but Cecilyn graciously accepted a plaque presented by the church.

Speaking to Rural Xpress on the recipe for having a long and lasting marriage, Cecilyn said, "It's to be honest with each other, to know a soft answer turneth away wrath. It's to listen to each other and respect each other's opinions."

The Leungs said that obeying their wedding vow was key to their marriage lasting so long.

"We made a commitment to stick by our marriage vows, to love and cherish each other through sickness and good health, as long as we both shall live. That has kept us through, even in some difficult times," Philip said.

"We also looked at our children. Broken marriages often affects the children, and we didn't want that to happen as we wanted the best for our kids. It's also to learn to understand each other, know each other's likes and dislikes, and to live for each other."

During the service, there was a symbolic passing of the guard from the longest to the most recent weddings. Nelson handed over a plaque to Sheldon and Natasha Forbes, who have been married for a month.

The young couple was inspired by the achievement of the elderly couples.

"It just encourages us to step in the right direction. One of the most important things is that we have God in our lives," Sheldon said. "If you don't have God in the midst, then you are likely to fail. Once we lean on Him, it's guaranteed to last."

Asked if they had concerns about getting married, Sheldon replied, "We didn't have one sweat. We were sure this is what we both wanted."

Sandra Forbes, a senior member of Ridgemount United, which is celebrating 175 years of existence, said traditionally, the church has hosted many weddings.

"There are reports of many mass weddings that used to happen here in early years. We still continue to host weddings on a regular basis," Forbes explained.