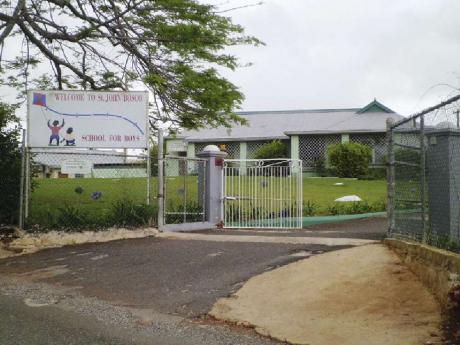 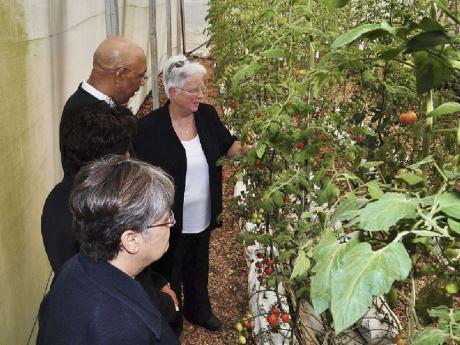 Custos Sally Porteous (left), Sir Patrick Allen, and Sister Susan Frazer inspect some of the produce grown by the boys.
1
2

CELEBRATING 50 years of Independence is, indeed, a milestone worth all the attention being given. However, for the hundreds of young men who have passed through the doors of the St John Basco Boys' Home during the last 50 years, it is even more important.

Established in 1960, two years prior to Jamaica's Independence, the home has evolved from a basic educational institution to one that caters to the welfare of boys in need of parental guidance.

With an average population of 160 boys, ranging in age from three to 14 years, the home has afforded many of Jamaica's young men the opportunity to celebrate their own individual independence through training in a variety of disciplines.

At the end of training, the boys are fully competent in agriculture, animal rearing, butchering, catering, retail operations, and several other skills. Many have filled positions in the tourism sector, the hotel industry and on cruise ships, while others have moved on to fill positions abroad or on to higher learning.

With a dedicated staff, St John Basco has been able to withstand challenges and remain focused on the children entrusted to its care.

"They are the reason for the home," declared its director, Sister Suzan Frazer.

Steering the institution since 1977, along with her colleagues, the ever-smiling Sister Suzan, as she is affectionately called, is far from being complacent when it comes to the safety, health, and education of the children.

Strives to be self-sufficient

Sitting on 32 acres of land that was purchased with money from an anonymous donor in the Hatfield district, the home has always strived to be self-sufficient, exploring the avenues of food production through farming, which forms part of the training curriculum.

Closing down the home was never contemplated as an option at anytime during its 52 years of operation. However, its present balance sheet is speedily pushing it towards the closure line, according to Sister Suzan, who spoke to The Gleaner during a recent visit by Governor General Sir Patrick Allen.

While thanking those who have assisted the school over the years, Sister Susan pleaded for the wider Jamaica to make contributions in cash or kind to help keep the institution going, for the sake of the 160 boys in its care. She was joined by Custos of Manchester, Sally Porteous, who pointed out that the institution, which also operates a Ministry of Education-approved school, has an excellent track record of success with the boys.

The school's education process starts at the kindergarten level through to an advanced adolescent development programme for the older ones.

Porteous added that given the immeasurable contribution St John Basco Boys' Home has made to the local community - and Jamaica as a whole - it would be very sad if it had to close its doors to due to a lack of funds.

Devastation by a fire in 1989 and Hurricane Ivan in 2004 are among the many hurdles the home has faced over the years. Despite this, the teachers, ancillary staff, sisters, volunteers, and the board of directors remain undaunted as they move forward in faith and with the help of many concerned people and organisations.

In the meantime, the home, with its state-of-the-art piggery, chicken coop, food farm and butcher shop, continues to apply creativity and hard work to sustain itself.