Bunting over the moon on jet ride 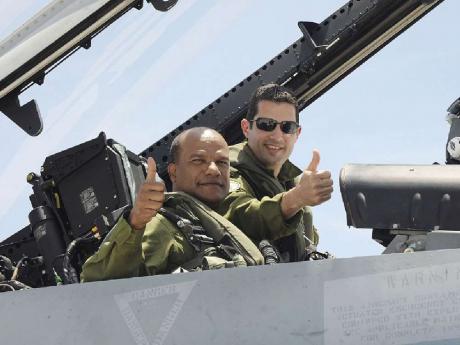 Minister of National Security Peter Bunting (left) gives the thumbs-up sign with Major Miguel Bernard of the Canadian Air Force just before take-off on the CF-18 Hornet aircraft for a test flight during a Jamaica Defence Force Air Display at the Norman Manley Airport on Friday. - Ian Allen/Photographer

AS NATIONAL security minister, it's probably not every day you have fun. But there was no doubt Peter Bunting was over the moon on Friday to be a passenger in an CF-18 Hornet, a jet similar to the one that wowed the crowd at the waterfront on Labour Day.

The occasion was an air show hosted by the Jamaica Defence Force and their Canadian counterparts at the JDF's Norman Manley International Airport base.

While other guests were getting tours of the actual Hornet that was used in the Labour Day air show, Bunting was getting prepped for his maiden jet flight.

Detachment commander, Lt Col Louis-Henri Remillard of the Royal Canadian Air Force, explained that the minister passed all the necessary medical tests before being fitted with his G-suit. The suit is specially made to pump air into the legs of the passenger and pilot to stop all the blood running into their legs and leaving their heads.

"They would go unconscious and obviously that can't happen," he joked. Remillard said that you have to be between about 136 and 230 pounds to fly in the jet. Too small and your body can't take the force if you have to eject due to emergency; too large and the parachute won't slow you down when you're heading for the ground. The minister and the pilot, Major Miguel Bernard, were also equipped with their vests which contained survival equipment including inflatable raft, rations and a first-aid kit.

At about 11:45 a.m., getting the all-clear from the technicians who made sure he was properly harnessed and strapped in and that the jet was in top shape, the Hornet taxied for a few minutes before roaring off, carrying Bunting and Major Bernard for a quick trip around the island. Remillard also confirmed that Bunting would be allowed to manoeuvre the jet.

"The pilot obviously would decide when," he smiled.