Two wins in a row for Portland athletes 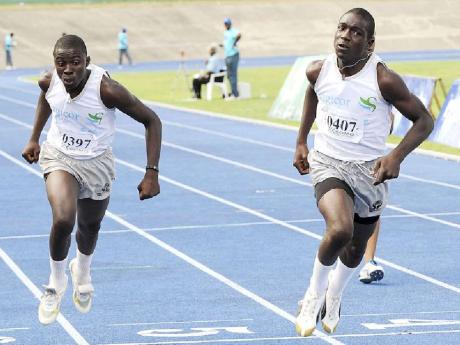 Romario Ferron (right) and André Brown, both from Portland, taking first and second in the Boys' Under-17 200-metres final at the Jamaica Teachers Association (JTA)/Sagicor National Athletics Championships at the National Stadium last Saturday. Fearon won in 23.89 seconds with Brown second in 24.05. - Ian Allen/Photographer

HERMAN REID, head coach of Portland, said that the parish-based athletes were better prepared mentally and physically than their competitors, which enabled them to successfully defend their title in the recently concluded Jamaica Teachers' Association (JTA)/Sagicor National Athletics Championships.

"We had some early setbacks. The inclement weather affected our preparation leading up to the championships, and several training sessions had to be cancelled," reported Reid. "Despite that, we were able to successfully defend our title as we had a more rounded team than last year, and the mood in the camp was very encouraging. The athletes were focused and rearing to go, and we were confident that we would defend our title."

According to Reid, one of the drawbacks to this year's championships was the lack of sponsorship, which somewhat affected the morale of the team as the schools had to fend for themselves. He noted, however, that plans to raise funds for next year's competition are far advanced. Several initiatives will be undertaken by the various schools.

In pointing out that the talent this year was much better than last year, Reid singled out the twins, Romero and Amario Ferron, with the former breaking the record in the 400m under-17 boys. The team went on to also break the record in the 4x400m relay. Reid also had high praises for the under-17 girls, who performed outstandingly.

He said, "There were a number of parishes that we were a bit concerned about including St Andrew, Kingston, St Elizabeth, Manchester, and St Catherine, who we knew was coming out in full force to dethrone us. But we were determined to defend what is rightfully ours. We first won in 2007, lost in 2008 by one point, but were victorious last year, and now we are the defending champion."