'I just never got going' 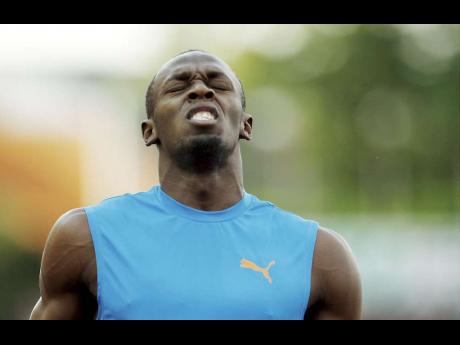 Jamaica's Usain Bolt reacts after competing in the men's 100 metres at the Golden Spike Athletic meeting in Ostrava, Czech Republic, yesterday. Bolt clocked a relatively slow 10.04 seconds to win the event after a lacklustre start. - AP

Usain Bolt won the 100 metres in 10.04 seconds in the wind at the Golden Spike meet yesterday, his first victory in Europe leading to the London Olympics.

The Jamaican had a slow start, but pulled ahead in the final metres. He failed to improve his season best of 9.82 from a May meet in Jamaica. Kim Collins of St Kitts and Nevis finished second in 10.19, followed by Darvis Patton of the United States in 10.22. Jamaica's Lerone Clarke was fourth in 10.26.

"It's hard to explain," Bolt said. "I don't really know what went wrong."

Before the race, Bolt said he was working on his notoriously slow start in hopes of bettering his world records in the 100 and 200 in London. Bolt won three gold medals at the 2008 Beijing Games.

"At the start, I didn't feel as explosive as I normally feel," he said.

This was Bolt's sixth competition in Ostrava.

"I was looking to come here for a good time. I guess it's one of those days," he said. "I just never got going."

The runners had to start twice after Simon Magakwe false started. That was something familiar for Bolt, who failed to defend the world championship title in the 100m in Daegu, South Korea, after he was disqualified for a false start.

But Bolt said that was not a problem for him in Ostrava.

"I did some starts and I was flying from the blocks so I said, 'Yeah, this is good'. I can't tell you what happened."

Bolt will have another chance to lower his times in Diamond League meets in Rome on May 31 and Oslo, Norway, on June 7, before returning to Jamaica for the national trials.

In the meantime, he said he will seek advice from his coach.

"I have to look at the tape and see what went wrong and call my coach to explain to me what I did wrong," he said.

He plans to be back in Europe to run in the 200m at the Diamond League meet in Monaco on July 20, his last race before the Olympics start a week later.

Elsewhere, Olympic javelin champion Barbora Spotakova of the Czech Republic looked strong, winning with her best throw of 67.78m to delight the home crowd with the leading performance in the world this season. World champion Mariya Abakumova, who beat Spotakova at last year's Worlds, was second at 64.34m.

"It's a wonderful feeling," Spotakova said. "I was hoping to win but to achieve also the world leading (distance) and meet record is fantastic. I fulfilled my goals."

Renaud Lavillenie of France cleared 5.90m for the season's best in the men's pole vault, edging Karsten Dilla of Germany, who cleared 5.72m. Steven Lewis (5.72m) of Britain was third.

Not the right day

"I hoped to get quicker," Spearmon said. "But today was not the right day."

Olympic champion Pamela Jelimo cruised to victory in the women's 800 in 1:58.49, defeating another Olympic hopeful, former world champion Caster Semenya of South Africa, who was second in 2:00.80.

"Many athletes complained about the wind," Jelimo said. "Of course, everybody wants to do the best because it's so close to the Olympics. The conditions were the same for everyone."

Double-amputee sprinter Oscar Pistorius failed to secure an Olympic spot after he was timed in 47.66 seconds in the 400, finishing eighth. Pistorius needs to run 45.30 or faster once more before June 30 to earn a trip to London in line with South Africa's Olympic criteria.