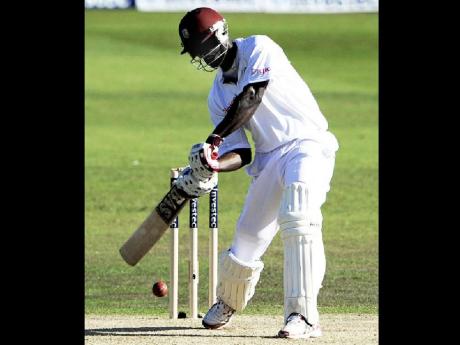 West Indies captain Darren Sammy hitting out during his unbeaten 88 against England on the opening day of the second Test at the Trent Bridge cricket ground yesterday. Sammy has so far hit 13 fours and one six. - AP 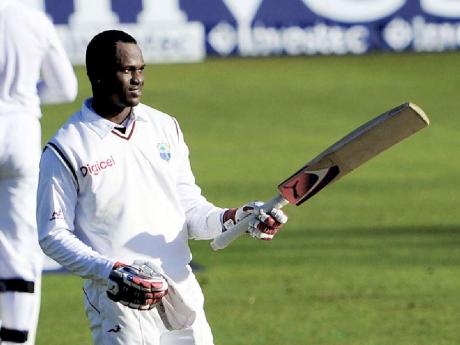 West Indies batsman Marlon Samuels celebrating his century against England at Trent Bridge yesterday. Samuels was 107 not out at stumps. He has so far hit 15 boundaries in his 225-ball stay at the wicket. Samuels and captain Darren Sammy combined for an unbroken 168-run stand for the seventh wicket. - AP
1
2

Marlon
Samuels stroked a high-class, unbeaten century while captain Darren
Sammy was on the verge of another in a career-best innings, as West
Indies flirted with disaster before staging a brilliant recovery, to
make a strong finish to the opening day of the second Test against
England here yesterday.

The right-handed Samuels carved out a
superb 107 and Sammy chimed in with a matured, unbeaten 88 to propel
West Indies to 304 for six on a sun-kissed day at Trent Bridge.

Such
enterprise was but a fleeting thought when West Indies collapsed in a
heap at 136 for six, 35 minutes before tea after they had earlier won
the toss and chose to bat in excellent conditions.

However, not
for the first time this series, West Indies salvaged what seemed a
terminal situation as Samuels and Sammy put on a record, unbroken 168
for the seventh wicket as the Caribbean side dominated the final
session.

Given out lbw for one at 64 for four off seamer Tim
Bresnan half-hour before lunch, Samuels made the most of his reprieve
through the DRS, collecting his third Test century and his first in
nearly six years.

He struck 15 sweetly timed boundaries - mostly
an array of sparkling drives - in an innings that required 225 balls and
lasted seven minutes shy of five hours, and shared in two partnerships
that repaired the Windies innings yet again.

The
languid Jamaican added 62 for the fifth wicket with Shivnarine
Chanderpaul, who fell just short of third successive half-century with
46, before partnering with Sammy in the precious century stand, the
highest seventh-wicket partnership by any team at Trent Bridge.

Sammy, meanwhile, hammered 13 fours and one six in a typically robust knock, facing just 121 balls in 169 minutes at the crease.

The
innings was only Sammy's third half-century of his career and it
surpassed his previous best of 61 in the third Test against Australia in
Dominica last month.

West Indies were in trouble from as early as
the fourth over of the morning when Adrian Barath was taken at third
slip by Jimmy Anderson off seamer Stuart Broad without scoring at nine
for one, attempting a forcing back foot stroke.

Vice-captain Kirk
Edward's wretched tour continued when he was bowled by fast bowler
Anderson for seven at 26 for two and stylish stroke-maker Darren Bravo
fell on the stroke of the first hour's play for three when he drove
loosely at Anderson to give Graeme Swann a regulation catch at second
slip at 42 for three.

Opener Kieran Powell played positively,
stroking seven fours in 33 off 49 balls before becoming the fourth
wicket of the session when he flirted with a wide ball from Broad to
give Anderson his second catch of the morning at third slip.

Samuels
and Chanderpaul, as they did in the opening Lord's Test, then stitched
up the innings with a partnership that saw West Indies to lunch at 84
for four.

Chanderpaul, who faced 86 balls in 131 minutes at the
crease, stroked nine fours in a breezy knock and seemed on course for
another big score. However, totally against the run of play, the veteran
left-hander missed one from off-spinner Swann that pitched and
straightened, to fall lbw an hour and 12 minutes after lunch with the
Windies on 125 for five.

Denesh Ramdin lasted just nine deliveries
before he was late on a defensive prod and bowled by Bresnan at 136 for
six, with just over half-hour to go before tea.

Samuels and Sammy
comfortably saw out a nervy half-hour to carry West Indies to the break
at 154 for six, before blossoming in the final session.

Unbeaten
on 41, Samuels announced his intentions immediately on resumption with a
pair of rasping back-foot drives for four in the first over bowled by
Bresnan.

He took another two boundaries from Bresnan's 17th over
to move into the 70s and then carefully crafted his way into the 90
before bringing up his landmark with a couple of boundaries.

The
first, another back-foot drive off Bresnan, took him to 98 and he raised
three figures with the second when he tickled Anderson fine in the next
over.

Sammy, meanwhile, emerged from an uncustomary quiet start
to play with his usual gay abandon, clearing long-off with Swann and
then swatting the bowler through cover, to move to the brink of his
third Test half-century.

He capitalised on Trott's innocuous
medium pace, with two boundaries in the right-armer's fifth over that
cost 10 runs as he marched to his highest Test score.

Both
batsmen, though, survived anxious moments against the new ball late in
the day with Sammy getting a couple of streaky boundaries through the
cordon off Anderson and Samuels playing and missing, but England went
without success at the close.