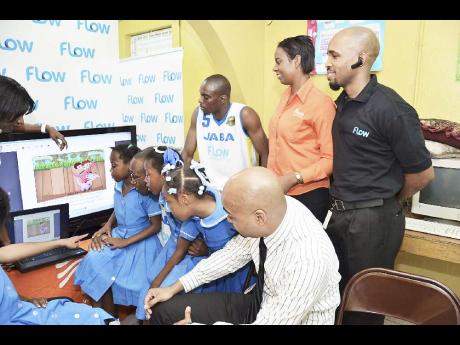 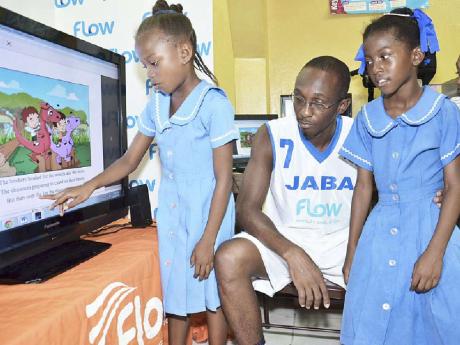 In an effort to capitalise on the wave of popularity of the sport in communities, players from the National Basketball League (NBL), in collaboration with league sponsors FLOW, took the action to primary schools on Read Across Jamaica (RAJ) Day on Tuesday, May 8.

RAJ was proclaimed on April 30 at King's House, making it an official part of the national calendar. The programme was initiated by the Jamaica Teachers' Association (JTA) in order to promote literacy and encourage children to read. RAJ has been steadily gaining attention from the political directorate and non-governmental organisations.

"We are pleased to be involved in yet another activity that enables the development of youth," said Denise Williams, director of government affairs at Flow, in a media release. "Only through inspiring, encouraging, and supporting our young and allowing them to tap into their creative imaginations will we help them to reach their full potential."

Williams added: "This is the value of reading, and when these youngsters see their sports stars in the Flow NBL engaged in reading, they will understand that it is a wonderful door that leads to all kinds of possibilities."

The day's activities included interactive reading, sessions with the students and friendly discussions in the hope that all would experience reading as fun while viewing knowledge as key.

"In 1999, when we expanded the NBL I thought it was a good time for us to use the NBL, platform as a tool to inspire the younger generation that would eventually look up to these players who play basketball," Ajani Williams, president of the Jamaica Basketball Association (JaBA), told The Gleaner.

"It is always the responsibility of our athletes to contribute to the kids coming up below them, and so it was important that we use sports to emphasise education and learning," the JaBA boss added.

Williams observed that it was an enjoyable experience for the children because they had a lot of fun spending time with the NBL players.

"We wanted to take a realistic approach to some of the woes facing the children, and this is something that we plan on continuing for a long time to come," Williams said.

Leaon Nash, communications and public relations officer of the JTA, was quoted in a release noting the enthusiasm shown by students whenever they have visitors.

"They always like to see new faces around them, assisting in enlightening them through developing a greater level of interest in terms of their own reading skills and the importance of literacy at a national level," he said.

He said: "We welcome the Flow National Basketball League players. Their presence had a tremendous impact, especially knowing that we are a heavily sports-oriented school. Having the sports figures creates heightened interest and fosters a greater level of admiration. Sports stars reading with the students encourages them to read more."

A number of the league's top players told The Gleaner they were taken aback by the experience.

Andrew Whilby, who plays for the Granville Jaguars in the NBL's Western Conference, read to the kids at Corinaldi Avenue Primary and said it was a day to remember.

"It was a very good experience because this was the first time that I was doing something like this," said Whilby, who is the father of three.

"The kids were very happy to see me because most of them were very fascinated with my height, and I also enjoyed talking to them about the benefits of reading and staying in school," Whilby added.

St Georges Slayers player, Leighton Brown, a professional engineer, said he was humbled by the experience.

"It was fun going back and reading to kids, and I felt kind of wanted because of the amount of attention that I received from the kids," said Brown.

"I also felt like role a model as well as a superstar because the kids were anxious to get my autograph," Brown said.

Flow's brand marketing manager, Yanique Forbes, who expressed happiness for the partnership they have forged with JaBA, said the response from the children was great.

"This is one of the community-outreach activities that we do for the Flow National Basketball League, and so it was good initiative," said Forbes.

"We had members of staff as well as players from NBL and executive members from the Jamaica Basketball Association, and we went to various schools and we read to the children, and it was great fun for us," Forbes said.