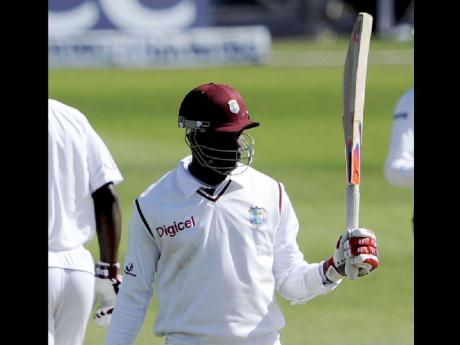 West Indies batsman Marlon Samuels saluting the crowd at Trent Bridge after reaching his 50 on the opening day of the second Test against England. Samuels was unbeaten on 107 at the end of the day. - AP

Marlon Samuels said he fulfilled one of his goals for the West Indies' tour of England, when he stroked a patient third Test hundred in the second Test against the hosts yesterday.

The 31-year-old Samuels was undefeated on 107 and led a West Indies recovery, propelling them to 304 for six in their first innings at the close on the opening day at Trent Bridge.

"It was my plan going into bat," said Samuels. "Once I got through the tough period early on, I took it to the England bowlers, on and off. The plan worked to perfection, so it's a wonderful feeling at the end of the day.

"I will leave my innings to others to judge. I don't really rank them. I have just come here to play some good cricket - what better place to come to do it?"

He said: "I missed the Digicel Test Series against Australia in the Caribbean because I wanted to come to England to play the No.1 Test side in the world - and doing well against them will do me the world of good too.

"It was not an easy decision, but Australia are not No.1 at this time. I didn't want to play against them. England are No.1 and I wanted to play the best."

Samuels and West Indies captain Darren Sammy put on 168 - unbroken - for the seventh wicket to lift West Indies out of catastrophe on 136 for six.

Sammy curbed his natural instincts to forge the record-breaking partnership with Samuels, which erased the previous mark held by Collie Smith and John Goddard - another Jamaican-captain alliance - that stood for 55 years.

"It was not frustrating at all," said Samuels. "He just needed someone at the other end to talk to him because he can get a bit carried away.

"It worked in his favour this day. But he would hit a four and I would let him know that they were a lot of gaps in the field, so he needs to give me the strike.

"I had my plan, but it was for someone else to come out after Shiv [Chanderpaul] got out and stay with me, then we could build a big partnership. I stuck to my plan and the platform was there for someone else to play a role - and he, Sammy, did it."

Samuels said he had endured plenty in recent times, but he was fully focused on playing and increasing his level of consistency.

"It was difficult," he said. "But a cricketer gets to spend little time with his family and I have children now.

"I used my time away from the game to spend it with my family. It meant a lot to spend time with the family, and simple things like go to the beach and stuff like this.

"But now I have come back to play, I know there is a lot of life left in me, and I am just looking to execute my plans.

"There have been a lot of ups and downs in my career. A lot of things have happened to me, so I am using all of them to motivate myself to be not just a better person, but a better player as well. I've come here to England and I want to impress as much as possible."