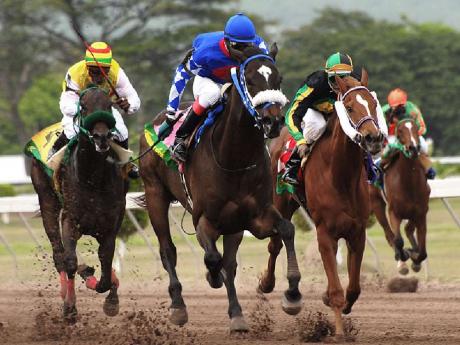 The clash of the American horses - HUPOMONE and RICHIESHAPPYNOTION - in the eighth race over 1200 metres for overnight allowance horses takes centre stage at Caymanas Park today.

HUPOMONE, an unbeaten American 3-y-o filly from the stables of 11-time champion Wayne DaCosta, has won her three races to date in impressive fashion. And the Lorne Kirlew-trained RICHIESHAPPYNOTOIN has won two of his last three races.

HUPOMONE slammed subsequent winner AWESOME CAMILLE by four lengths over the straight on her seasonal debut a month ago in restricted company, covering the distance in the smart time of 57.1 behind fast splits of 22.2 and 33.0 for the first three furlongs going wire to wire.

Since then, she has looked a monster at exercise, turning in bullet work after bullet work - clocking 1:12.0 for six furlongs on May 12 and 59.4 on the round-five course a week later.

She reports razor sharp with leading jockey Dane Nelson aboard, and in receipt of of 1.5kg from RICHIESHAPPYNOTION, is given the edge.

Still, it should be no walk in the park for her, as 'RICHIE' will be coming with blood in his eyes.

Last time, he failed in is bid for the hat-trick when finding fellow American NOON IT IS too good in a fast-run 1100-metre race on April 9, but will report sharper today.

Also on the nine-race programme is the annual renewal of the Drumbeat Trophy (claiming $180,000) over the straight to be contested by 10 starters, including REDS THOMAS, FIRST EDITION and SKIPPING MICHELLE, all winners over the course in recent months.

The winner will more than likely come from this trio, but REDS THOMAS, now dropped in class after that fair effort over the course (61/4 lengths seventh) to OCHUN last Saturday, is tipped to defy topweight with Walker riding for trainer Dennis Lee.

SKIPPING MICHELLE, who scored a 99-1 upset over the course on May 9, and the grey FIRST EDITION are twin dangers.

Elsewhere, the unbeaten 3-y-o gelding, TYPEWRITER, from the stables of Spencer Chung, having bypassed last Saturday's Lotto Classic (Governor's Cup), should win his Derby prep and make it three in a row going into the June 9 premier classic.

He faces eight opponents, including the Americans ARGUMENT DONE, UPPA TUNE, KROLL and JAH LOVE, but the son of Western Classic-Docs' Paladin has class written all over him, and ought to be followed with 52.0kg and Shane Ellis again in the saddle.

I also like down-in-class DIABOLICAL KID in the second race, ST. BERNARD in the fifth, and GALACTUS in the seventh for maidens.