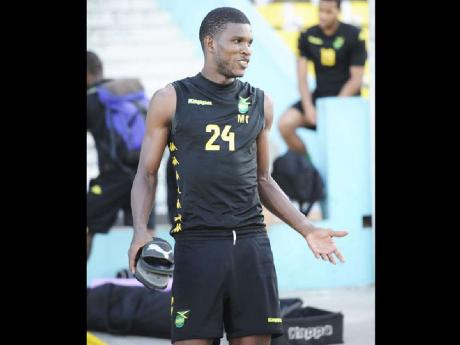 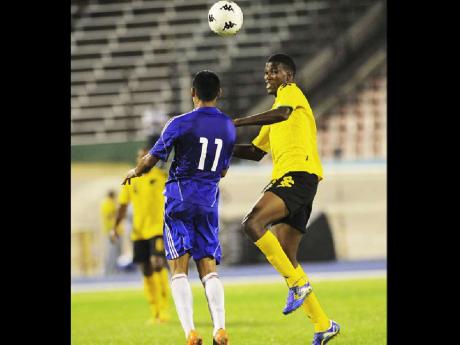 AS FAR AS Rohan Reid and being a Reggae Boy is concerned, nothing happens before the time.

The Arnett Gardens midfielder seems to be fourth-time lucky, with his most recent call-up to the Jamaica senior football team the most fruitful and somewhat promising.

He has become a fixture in recent camps called by head coach Theodore 'Tappa' Whitmore and has seen his minutes soar from second-half sub in his first international game back in national colours - against Cuba in February at the National Stadium - to starter in last week Friday night's 1-0 win over Guyana, in another friendly international for the Reggae Boyz, this time at the Montego Bay Stadium in Catherine Hall, St James.

The match represented his second consecutive start, but pointedly, his fifth cap in a national career that seemed to have been dead and forgotten through the years while he had been ignored by various national coaches. This after his robust, hard-working displays had earned him selection with Wendell Downswell calling the shots near 2005, not many years after Reid had transferred to Wadadah from Montego Bay Boys' Club, which he had helped win promotion from St James' division two to division one.

Then, the lanky linkman was forcefully impacting on the National Premier League as he became a cornerstone in the Wadadah team, while scoring some memorable long-distance goals playing from central defence or deep midfield, where he now seems to be firmly anchored.

However, with World Cup Qualification (WCQ) looming, he never held down a spot in the limited time and was dropped. Other opportunities would arise, but like the first, his stint in the national programme was brief.

Ironically, with WCQ on the horizon, Reid, who won the rural ISSA Under-16 title at Maldon High, is back among the Boyz. His selection was influenced by stalwart performances at Arnett Gardens, where he captained the team, scored vital goals and played a leading role in the club recording its best season in years; winning the KSAFA Champions Cup KO and Jackie Bell KO titles and finishing seventh in the Red Stripe Premier League.

"He was a good surprise," said assistant coach Luciano Gama, of Reid's play since joining the national squad. "He came in a bit late in the programme, but in the little time he had in the field (on the field) he proves that he can be a good (asset) in the programme."

The Brazilian added: "He's a very positive guy ... has good leadership in the group."

Reid himself is over-whelmed by the current run.

"It's a wonderful feeling and honour to represent the people of Jamaica and do well.

It's the best time now, knowing that we've World Cup qualification," he said gleaming. "As a player, I have to do my best to make my country proud and my family."

The years on the sidelines have taught him much and he admits that despite being drafted into the programme close to the qualifiers, he has to adjust not only his level of play, but the way in which he relates to those around him.

"That's one of the main requirements for any player, knowing how to interact with your teammates and coaching staff ... and knowing to follow the rules."

Reid's guideline for his game might make such important things a bit easier.

"My aim, as always, is to work hard for my team. If we work as hard as players and as a team we will achieve," he noted.

It is a sentiment shared by a group, in which all like Reid are, first, trying to make that final team for the qualifiers. In games of a different order than what Jamaica will face in its June 8 WCQ semi-final round opener against Guatemala, the second friendly against Cuba and Friday's warm-up against Guyana, the Jamaica squad contained mainly local-based players.

Not afraid of challenges

Now, his bid for a starting place in tomorrow's penultimate warm-up fixture, against Panama at the National Stadium at 6 p.m., and the WCQ itself, has got harder with competition from Jamaica's overseas-based throng, many of whom have already established themselves at international level.

Yet, it is a challenge of which he is not afraid.

"Yes, we always have to be ready to deal with that type of competition because Jamaica is blessed with an abundance of talent. As a player, you always have to work hard," said Reid. "Then you have to be introspective - knowing what to do, when to do it, how to do it to try and secure a place in this team."

Actually, the 29-year-old will be looking to feed off the professionals within the lot.

"They are players who were here and are now out there and would have gained a lot of experience," he reasoned. "It gives me a level of confidence. It is good when you can learn from your fellow Jamaicans.

"That's what I want. Knowing that my fellow Jamaicans were here playing and are now playing professionally overseas. It gives one a level of motivation to know that you can work hard and reap the benefits."

The spoils for Reid would be a contract like theirs. And if he manages to hold down a spot among the Boyz, this could just be his time.